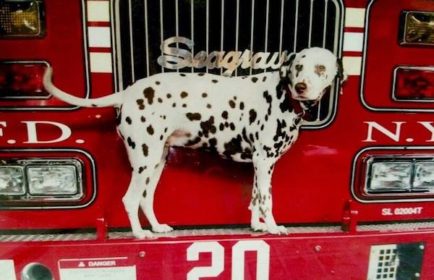 A natural affinity for horses is what lead to the Dalmatian being associated with fire departments. Back in the mid 19th century, the first horse-powered fire trucks started to appear in cities; at the sound of an alarm, one or two Dalmatians would run out of the fire house and bark to warn pedestrians to get out of the way, a firefighters’ wagon rushing out of the building was imminent. Once the wagon turned onto the street, the dogs would run alongside the trucks – still barking – to clear the way. One might say that Dalmatians were the very first sirens.

The dogs defended the horses from other dogs as they rushed to the scene of a fire, then stood guard over the horses and fire equipment.

Then, as now, firefighters took pride in their companies and would turn out for any occasion, such as a parade, to show off polished brass, a shiny red wagon/truck,  and gleaming leather. It was only natural to include their  remarkable spotted dogs.

The tradition of teaming a Dalmatian with a fire department lives on. After seven members from Ladder 20 died on the 35th floor of the North Tower on 9/11, two sheriffs from Rochester, New York showed up with a Dalmatian puppy named “Twenty.” She became Ladder 20’s mascot and therapy dog as she helped build morale in the years following that tragic day. She would jump into the truck, stick her head out the window and bark.  Sadly, Twenty took her final run to Heaven in 2016.