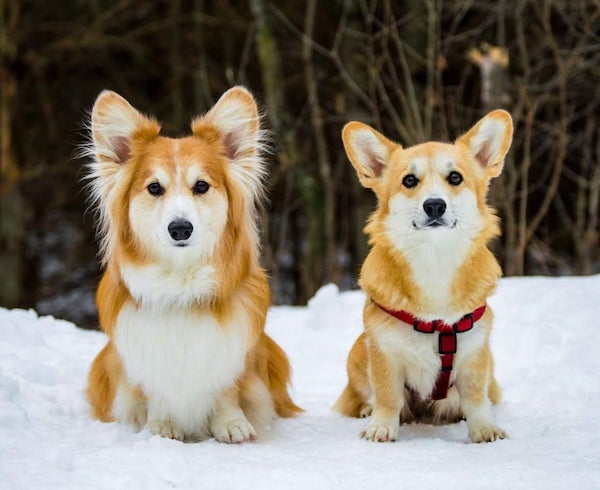 Among some cynologists is the hunch that the Pembroke Welsh Corgi may have descended from the same family of dogs that include the Keeshond, Pomeranian, Samoyed, Chow Chow, Norwegian Elkhound, Swedish Vallhund, and Finnish Spitz – all of them spitz breeds. That’s as close as the Pembroke will get to being a spitz breed, itself, which it is not. That said, it may have inherited something seen in one of the spitz breeds, the Swedish Vallhund, and that is what we call the “fluffy” gene.

The gene for long coats in the Swedish Vallhund is called FGF5, an autosomal recessive gene. Vallhunds with a correct hard, doubled-layered short coat can be ‘carriers’ of the long coat,  and they can pass the gene on to puppies without themselves having a “fluffy” or incorrect long coat, but it takes two parents who each carry FGF5 to produce puppies with long fluffy coats. Fluffy coats are a serious fault in the Vallhund, but our sense is that the percentage of carriers in the breed population is so low as to not to be regarded as a serious threat to the breed.

In Pembrokes, some puppies are also born with a longer, soft coat that makes them ineligible for the show ring, and they’re called “fluffies.” Each parent carries two coat genes and will pass one of those two coat genes on to their puppies. A pup will inherit a gene from each parent, and the dominant gene will determine the pup’s coat type. If the puppy gets two recessive “fluff” genes, they’ll exhibit the recessive (fluffy) coat. Put another way, if two normally coated dogs who carry the fluffy recessive gene are bred together, they’ll produce Fluffy Coat/fluffy carriers 25% of the time. A single litter from two standard coated parents can create standard coated non-carriers, standard coated carriers, and fluffy coated puppies. Coat differences usually show up around two to three weeks after the youngsters are born.  As in the Vallhund, the FGF5 gene is responsible for the recessive long-haired phenotype.

As in the Vallhund, a coat of extreme length with exaggerated feathering on ears, chest, legs and feet, etc., is considered a very serious fault, though in both breeds, such pups enjoy good health and temperament and make fine companions. As both breeds are working breeds, however, a very full, woolly coat with almost no coarse topcoat hair is impractical in a work setting where mud, a good rain or snow can saturate the coat, chill the dog, and slow it down, and this is probably why it’s considered a fault.

Interestingly, we noticed that in both breeds, “harness markings” are evident. In the Vallhund, it’s considered an essential feature, and in the Pembroke, it’s called a fairy saddle.

Image: Photo of “Shippo” (fluff) and his friend, “Lizzie,” both now passed on. The photo was taken by Shippo’s owner, Victoria Steen, and first appeared in 2016 at https://www.facebook.com/CorgiShire.  Our thanks to Victoria for allowing us to share this marvelous image.

3 thoughts on “The Fluffy Gene”