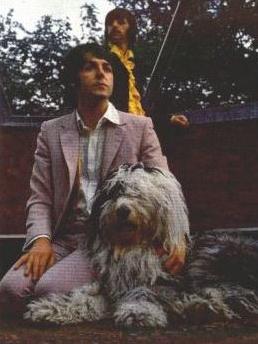 A while back, we mentioned that the Beatle’s song, “Martha, My Dear” was based on Paul McCartney’s Old English Sheepdog, “Martha.” It wasn’t the only song Martha inspired.
When Paul and a friend were walking “Martha” on Primrose Hill one morning, they turned to watch the sunrise, and when they turned back, Martha was missing. McCartney spun this way and that to look for her, and out of nowhere a man appeared on the hill without making a sound. The gent was dressed respectably, but Paul knew with certainty the man hadn’t been there seconds earlier. The two exchanged a greeting, the fellow spoke of what a beautiful view it was from the top of the hill, and within a few seconds, the man was gone, vanished as quickly as he had appeared.
In the book, “Yesterday,” Alistair Taylor, the friend with McCartney that day, corroborated the event. Alistair wrote, “He had seemed to vanish in thin air. The nearest trees for cover were too far to reach by walking or running in a few seconds, and the crest of the hill was too far as well to reach in that short time. What made the experience even more mysterious, was that just before this man first appeared, [we] were speaking to each other of the beauty they observed of the view towards London and the existence of God.”
Once back home, they spent the morning discussing what had happened, trying to make some sense of it. They both agreed that this was something others other might experience as the result of an “acid trip,” but both swore they hadn’t taken any drugs.
The experience was the basis of the song, “Fool on the Hill.” When McCartney filmed the sequence for the song in the video, it shows him on a hilltop overlooking the town of Nice. And now you know.
[iframe id=”https://www.youtube.com/embed/6Hlw_9ldThs”]
Image found on Pinterest and happily credited upon receipt of information