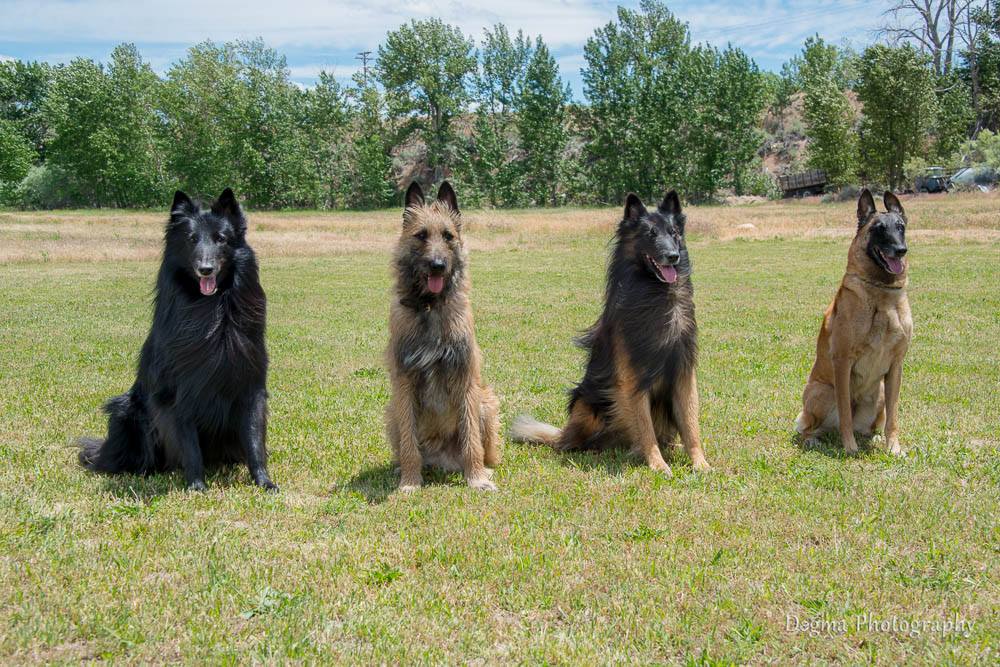 Our thanks to a friend of National Purebred Dog Day® for passing along this terrific picture of the four Belgian Sheepdogs, from left to right: The Belgian Sheepdog, or Groenendael, the Laekenois, the Tervuren, and the Malinois.
The AKC recognizes these four varieties as separate breeds, but the United Kennel Club, as well as Europe and Canada, regard them as one breed. These varieties differ only in their coats and a bit superficially in appearance, with variations in “type,” temperament and energy levels depending upon the particular line. We’ve read that the dogs are so closely related that when breeding any two dogs of the same coat color and length, it’s possible for puppies of different “breeds” to be in the same litter. Put another way, a “Groenendael litter” could contain a Tervuren puppy. If we understand things correctly, this means that a puppy appearing to be a Tervuren variety born to Groenendael type parents in the AKC would have to be registered as Belgian Sheepdog, and not be able to compete in AKC conformation events.
In 2012, the FCI announced that it would allow the crossing of Malinois and Groenendael, which produces a short-coated black dog, previously not permitted. We’d appreciate hearing from our Belgian sheepdog friends to verify any of this.
Photo appears with the kind permission of the photographer, Cathy Modica, who captured all four Belgians at the American Belgian Malinois Club herding trial in Gardnerville NV USA — each of them was either trialing or working doing stock set out.

3 thoughts on “The Four Belgians”