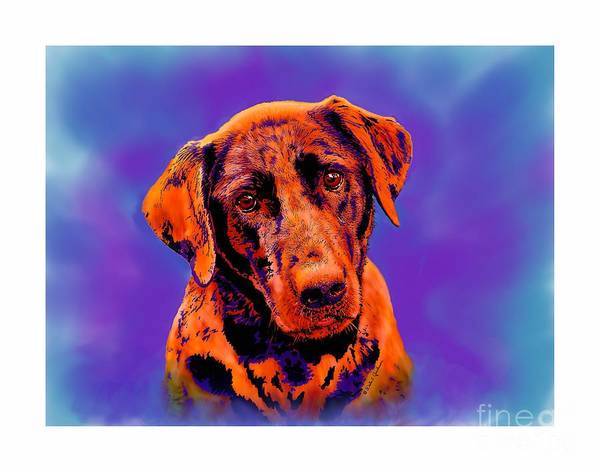 Color is a hot button topic in many breeds, and the Labrador Retriever can be one of them.

Let us be clear from the onset: Purebred Labrador Retrievers are accepted by the AKC in three colors, black, yellow and chocolate.  That’s it.

Black is the most genetically dominant of the colors, and yellow may not have been seen until 1899 when “Ben of Hyde” was whelped, though some early Labs carried the genetic code to produce yellow puppies, and some carried the code for chocolate (brown). It wasn’t until 1964 when “Cookridge Tango” became the first chocolate English Show Champion Labrador Retriever.

We’ve already discussed on these pages that the AKC does not recognize silver, gold, gray, brindle, goldador or (shudder), black and tan Lab, and those posts can be found by doing a search at the top of the page for “Labrador Retriever.”  In this post, we talk about a color that is acceptable, but one that is often presented on-line as if it were a unique and wholly different type of Lab. The Fox Red Labrador Retriever is not a different kind of Labrador Retriever, but a Labrador Retriever as we all know and love the breed.

The AKC breed standard indicates that in this breed, “yellows may range in color from fox-red to light cream, with variations in shading on the ears, back, and underparts of the dog.” Fox red is simply a shade of yellow, just as light cream is.  One may also see these dogs marketed as “Ruby Labradors,” but they are Labrador Retrievers that are a deeper shade of the traditional yellow color, and nothing else. Kennel clubs across the world don’t recognize the Fox Red Labrador Retriever as a color in its own right, let alone a different variant of the breed.

Remember now, the default color in the Labrador is black, and this is a result of a pair of genes called the BB genes. A black dog could have, let’s say, the Bb gene, the little b being responsible for the code necessary to make a brown coat instead of a black one. Because big B is dominant and switches off the little b, the dog will be black. The little b only shows up when the bb gene appears, and that’s when we get a chocolate colored Lab.

A yellow Labrador happens when the “e” genes switch off the black and brown coat. These genes come in EE, Ee, and ee, and it’s the “ee pair” that come together to completely block both the big B and little b genes. A “fox red” Labrador is simply a variation of yellow, its shading controlled by pheomelanin, a pigment that’s controlled by yet another two different sets of genes, A and C.  The “A gene” controls the production of the red color, and the “C gene” controls whether or not it is fully expressed or diluted.

The genetics portion of our post now over, we should mention that dark yellow or fox red Labs seem popular among hunters and working gun dog owners, as several forums we visited suggest. A pale yellow dog, some opine, is too easy for wildfowl to spot, and thus isn’t an ideal hunting companion. Indeed, our sense is that the Red Fox color was likely kept alive by hunters who didn’t care as much about the breed’s color as they did the dog’s field performance.

2 thoughts on “The Fox Red or Ruby Labrador Retriever”