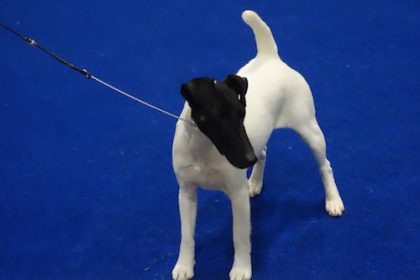 The Fox Terrier is a very old breed of terrier, and by 1885, American enthusiasts of the breed organized themselves into the American Fox Terrier Club. Three years later, the AFTC became the first specialty club to become a member of the AKC.  Even earlier than that, England’s Kennel Club made the Smooth Fox Terrier the first breed in the fox terrier family to be given official recognition – around 1875 –  but in those days, sportsmen often kept both Smooth and Wirehaired varieties. The thinking was that because the Smooth Fox Terrier was smaller and sleeker, it would be released to “go to ground” first, widening the hole and making it easier for the larger and scrappier Wire to get into the lair or den, and take care of business.

At the time, it was believed that the two coat varieties were the same breed with different coats, and as such, early breeders cross-bred the two thinking that one would give the other more white, better pigmentation, a cleaner cut of head, and so on. Because of this practice, today’s Wire and Smooth Fox Terriers are similar in many ways, but we know something today that those earlier fanciers didn’t: These are two different breeds with different ancestries.

Most breed historians now strongly suspect that the Wire Fox Terrier descended from the Rough Coated Black and Tan Terriers of Wales, Derbyshire, and Durham. Smooth Fox Terriers are believed to be a combination of smooth Black and Tan Terriers (know now as Manchester Terriers), Beagles, Bull Terriers, and Greyhounds. Interbreeding Wires and Smooths hasn’t been practiced since the early 1900s.