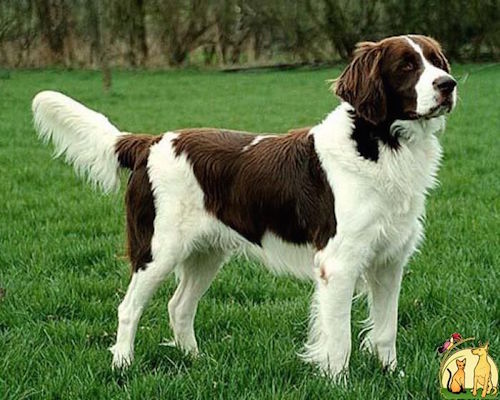 In English, its official FCI name is the Drentse Partridge Dog, but interestingly, the AKC has the breed listed in its Foundation Stock Service under its Dutch name, Drentsche Patrijshond. The reasoning, as we understand it,  is that calling the breed the “Dutch Partridge Dog” would be like calling the Chesapeake Bay Retriever the American Bay Retriever.

It’s one of the oldest, if not the first of the Continental Pointing breeds, but despite that, there are thought to be only about 4,000 Drents in the world. Its name suggests a dog that hunts only partridges, but the Drent was originally used by falconers or cast-net hunters to hunt most small game before shotguns were available. The breed has a solid point when approaching game, and impeccably at a moderate distance. When pointing, Drents will wait for the hunter to come near, but if this takes a long time, she’ll look back for her master. Drents may be too close working for certain types of game, and in water, other Continental breeds may “out-swim” the breed, but its versatility makes it an affectionate family dog, useful hunting dog, and a respectable watch dog.

One thought on “The Drent”