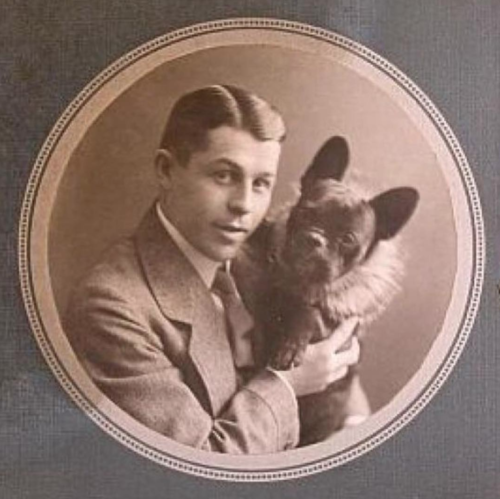 This irresistible breed was first bred in Nottingham in 1800s by lace makers who wanted to create a small, miniature version of English Bulldog; at first, some called these dogs, “Toy Bulldogs.” In the 1860s, the craftsmen, now casualties of the Industrial Revolution, moved to France, and settled in Normandy with their dogs, puppies often acquired from breeders who considered them to be too small, or didn’t care for ears that – gasp – stood up like a bat’s. It is there that the dogs were given the name, French bulldogs.

But did you know where the breed got its nickname?

French Bulldogs first appeared in the United States in 1896 at the Westminster Kennel Club Dog show in New York, and that was when they got their nickname,  ‘Frenchie.’

Frenchies went on to become hugely popular among American society ladies who first noted how fashionable the dogs were in Paris. It wasn’t unheard of for a French Bulldog in 1910 to sell for $3,000. To put this in perspective, the relative inflated value of $3,000 today is $81,827.87. Needless to say,  it was the well heeled with names like Rockefeller and J.P. Morgan who could afford these dogs.

One of these affluent owners was Robert Daniel, a 27 year old banker who was returning to the United States from France with a brindle French Bulldog named Gamin de Pycombe for whom he had paid around $16,000 US dollars. Gamin was sired by CH Charlemagne of Amersham, a French import to Britain who was Britain’s first pied champion Frenchie, and who later became the first French Bulldog to be a champion in both the UK and the United States.

Sadly, the pair were coming home on the Titanic. Gamin was said to be staying in his owner’s cabin, and when another passenger, Edith Russell, walked down the hall on her way to the upper deck after the ship had hit the iceberg, she remembered hearing him whimper. Russell went into the cabin to calm him, and added in an interview given in 1966 that that the dog was so scared that she petting him and laid him down on his bed. Gamin was very obedient and looked at her ever so sweetly as she left the cabin. Had she known how much danger they were in, she would have taken the dog with her.  Another surviving passenger later reported having seen a French Bulldog swimming in the ocean, so evidently, someone did let Gamin de Pycombe out of the cabin, however, the little dog drowned.

Robert Daniel survived and went on to become a Virginia senator.

2 thoughts on “The Frenchie and the Titanic”