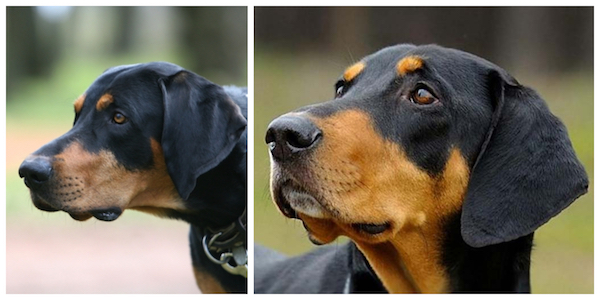 You would be forgiven if you thought the Transylvanian Hound and the Lithuanian Hound resemble each other. From their coloring and the pips over their eyes all the way to their “houndiness,” they are remarkably similar appearing scenthounds. They also have some commonalities, but they are very different breeds. The Lithuanian Hound is heavily boned and muscular, and can measure up to 24 inches and up to 79 pounds. The Transylavian Hound weighs closer to 55 pounds and has a top height of 26 inches for males.

One thing they share is a history in which their respective breeds were nearly lost forever. Between 1943 and 1969, no new litter of Transylvanian Hounds was registered at all.  Indeed, the Federation Cynologique Internationale (FCI) believed the breed had become extinct. More on that can be read here.

War also nearly decimated the Lithuanian Hound. More on that a bit further down.

Both the TH and LH are ancient breeds. The Transylvanian Hound, also known as Erdelyi Kopó, reached its apex of popularity in the Middle Ages when it found favor as a hunting dog with the Hungarian aristocracy. The Lithuanian Hound’s roots also reaches back to Medieval Ages, and while nobility would come to appreciate hunting over these dogs, for a very long time, Lithuanian Hounds were a necessity to commoners who relied on hunting for survival.

At this point, we focus on the Lithuanian Hound because the breed has yet to be covered on this site.

Cynologists believe the breed was the result of breedings between local Lithuanian scent hounds with other regional breeds including Polish Hunting Dogs, and then with a variety of other hound breeds from Europe (which may have included Bloodhounds and Beagles as well as hound breeds from Northern and Central Asia. One source erroneously suggests that the Lithuanian Hound is a fairly new breed, and that it could be considered the newest breed of Russian scenthound.  Not true. The breed was first mentioned in written sources in 1541 when a forester from Hrodna sued over a stolen hound. The LH was also mentioned in the 16th century Statutes of Lithuania and the Grand Duchy of Lithuania.

As mentioned earlier, this breed was a necessity to hunters who valued its relentlessness and well honed hunting abilities.  Brave, fast and robust, the breed became very popular in Lithuania. Breed numbers increasingly fell, however, due to changing hunting habits and increasing urbanization that impacted a dog best suited for hunting large animals in large open areas. When hunting became popular again, there were only 78 dogs left that resembled Lithuanian Hounds.  Enthusiasts rallied to save the breed, and through their efforts, the hound was revived and standardized by the 1960s. The ﬁrst exhibition of Lithuanian Hounds was organised in 1981 with the help of handlers and hunters, and 62 dogs were exhibited. In 1987, the number of registered and documented Lithuanian Hounds went up to 350!

Following dissolution of the Soviet Union in the 1990s, the number of individuals began to decline again, but hunting and breed fanciers are working to reverse this. The Lithuanian Hound is recognised by the Lithuanian Cynological Society, but as of this writing,  no other kennel club, major registry, or cynological group maintains records for the breed. The Lithuanian Kennel Club is working, however, to register the breed with the Fédération Cynologique Internationale (FCI).