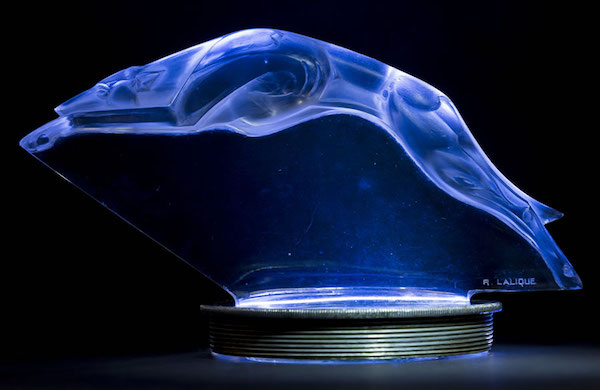 What’s in a name?

There are various explanations for the origin of the name, “Greyhound.” Some experts suggest that the earliest Greyhounds were mostly grey in color leading to their name, GREYhound. Others believe the term comes from the Old English words, “grei,” meaning “dog,” and “hundr,” meaning “hunter.” Another theory is that it’s derived from “gre” or “gradus,” meaning “first rank among dogs.” A final suggestion is that the term derives from “Greekhound,” since some believe the hound was introduced to England via the Greeks.

As for our image, it is a rare French glass of a racing Greyhound designed by René Lalique in 1929. Named “Levrier 1,”  it is the only bespoke mascot made to commission and was never put into commercial production.  It is named for its distinctive color which was achieved by Lalique’s innovative use of a blue light filter fitted in the custom mounting. The mascot was designed to be illuminated on an automobile’s prominent radiator cap, something we can’t now imagine doing because in 2012, the auction House, Christie, estimated the value of the piece at about $765,970.

It’s believe that the “levrier” was inspired by the most famous racing Greyhound of all time, Mick the Miller, who made headlines during a brief racing career that began with a record-breaking run at the English Greyhound Derby in 1929. There is a royal connection, here, as well. Prince George, Duke of Kent, the fourth son of King George V and Queen Mary, was a regular at “the dogs,” (Greyhound racing), and was often accompanied by his brother, the future king. Prince George also loved cars with a passion, so his choice of the Greyhound automobile mascot made sense.

George was a frequent visitor to Paris, and the Lalique Company had a tradition of presenting glass to European crowned heads between the wars, including a spectacular table service presented to the visiting royal family in 1938. Interestingly, while George’s commission was recorded in the British magazine The Studio in 1931 as well as in Lalique Company archives, the original glass Greyhound was thought to be lost, possibly during the war when Prince George, himself, was lost in an RAF plane over Scotland. The Royal Blue resurfaced when it was discovered in an obscure location in India.  Through the combined efforts of Heritage offices in Dallas, Hong Kong and New York, the glass Greyhound found a new home in California with entrepreneur Gerard Smith, a collector in recent years of the mascots of René Lalique. He struck it big with this addition. The Royal Blue is considered a once-in-a-lifetime find giving its owner the unique chance to collect a “full set” of Lalique car mascots totaling 30 in all.