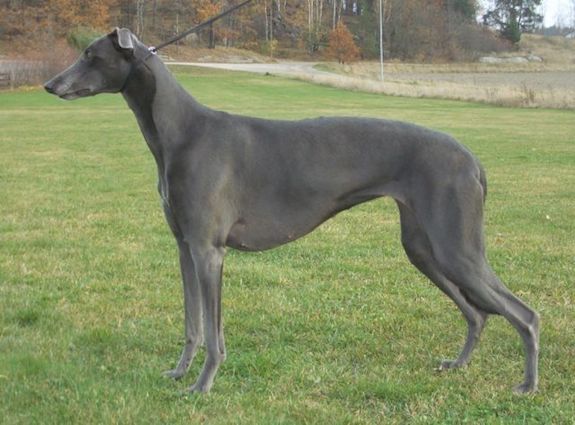 The AKC breed standard for the Greyhound indicates that color in this breed is “immaterial,” but all Greyhounds are one of two basic colors as determined by gene pairs at the A location, black or sable red. That said, when registering a Greyhound with the AKC, there are thirty-nine colors and four markings from which to choose, and gray is not one of them.

Grey colored Greyhounds are actually rare, and are not referred to as gray, but as “blue.” Blue is a dilute of the color black, and in order for a Greyhound to have a blue coat or any variation of blue, the recessive gene must be passed down by both parents. This unique gene makes blue Greyhounds a rarity, the color ranging from a pale misty blue to a deep blue (grey) almost black color.  Most blues will also have bluish rather than black colored nose leather. 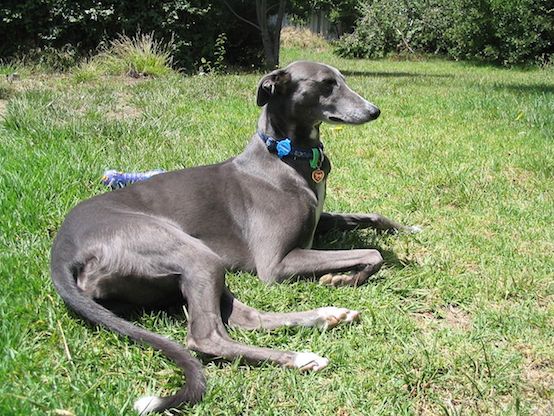 Among some breeders, Greyhounds that normally identify as blue, blue brindle or blue fawn are sometimes grouped into a category called “Blue Variant” to help determine color inheritance when considering future matings. As an aside, we came across a comment on a Greyhound forum which states that blues are “the blondes of the Greyhound world.” Another added that blues are “quirky.” Still a third poster replied,  “I have a blue brindle, and I can attest to the fact that she is a princess who believes the entire world is there only for her convenience (except for the parts that scare her, and they are to be ignored or run away from).

Sounds like a fun dog to know. Just saying.

If interesting coat colors in the Greyhound interest you, you’ll want to read this about Snowflake Greyhounds.

Our top image is of a blue Greyhound bitch from Sweden named Blue-Dream’s Waltzing Mathilda owned by Annki Oscarsson. We found Blue Dream’s image on a site which didn’t indicate copyright restrictions on photographs, so we share it here in the interest of education and with the understanding that we’re not infringing. The middle photo comes from Wikimedia Commons. She is an Australian retired racing blue Greyhound named Tillee and is seen here relaxing.

4 thoughts on “When Grey is Blue”