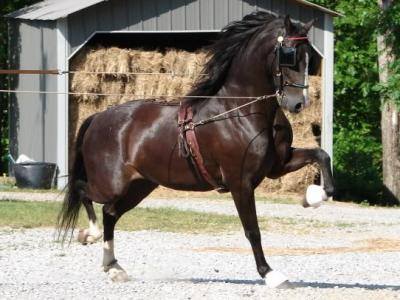 In a horse, a hackney gait (seen at the left) is characterized by a “high kick,” or a pronounced flexion of the knee, but in dog breeds where that particular gait is considered a fault, it’s caused by a dog having more angulation and drive in his rear than in his front. Instead of overreaching, the dog uses extra high and extra quick action of his forelegs to keep his front feet out of the way of the back ones.  It results in bouncy movement which is completely inefficient – and indeed, compensatory movement for many breeds.

Why is it inefficient?

It’s inefficient because instead of spending energy getting from Point A to Point B on the ground, a high stepping dog spends at least half of the same energy going vertical instead of horizontal. This would be fine if the dog was climbing a ladder, but when herding sheep or pulling a sled, not so much, and the end result is that the dog tires quickly.

A hackney gait is correct for the Miniature Pinscher. For a working or herding dog, no!