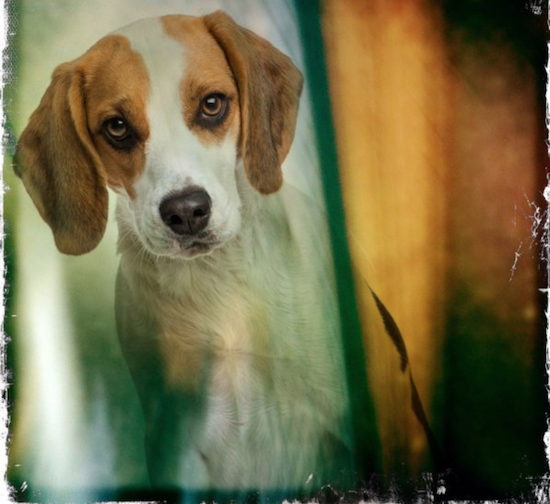 Beagle colors are defined by registration associations, and the Beagle’s AKC standard is very clear about acceptable colors: It can be any true hound color.

“Any true hound color” includes the traditional black, tan and white combination, or blue tri. In most other countries, “any true hound color” tacitly means “except liver” because light yellow eyes are often associated with that color when brown or hazel colored eyes are preferred.

Other, equally acceptable colors, are tan/white, lemon/white, red/white & chocolate, as well as variations and dilutes of these colors. In fact, there are twenty-five AKC color combinations, and making up those twenty-five combinations are ten colors. There are also six distinct markings that a Beagle may have.

All that said, one might encounter a color called “harepied” or “hair-pied,” and it’s not a color one will see much because it’s rare. Sometimes such puppies are called tan and white, but they are most likely “hare pied” beagles. These Beagles have black tips on the hairs down the middle of their backs, or have coats on which one hair has different colors, but the tip of the hair is black. A hare-pied Beagle may have dark rims on its nose, but the center part is pale, better known as a “butterfly-nose.”

Hare-pied Beagles can be lemonpied, harepied and badgerpied, and when they get older,  the pied “stripe” on their back can fade out. Still, that butterfly-nose remains, and it’s how one can identify a harepied dog.

In Germany, harepied Beagles descend from Christine Watson’s Korwin line in Scotland, and came to German through the Bar Atlantic Beagles of Baerbel Roellinghoff.

We apologize for not having a photo of an adult harepied Beagle, but would be indebted to anyone willing to let us share theirs, full credit of course.  The image at the top is from DepositPhoto