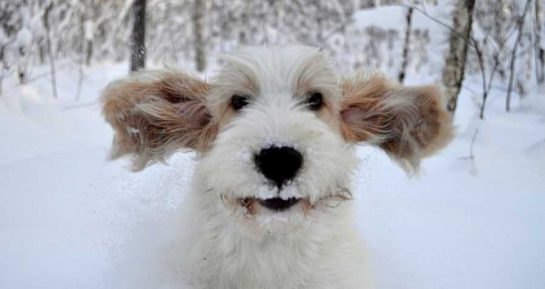 Skycastle French Hounds was a Basset Hound pack founded in 1948 by John and Elizabeth Streeter. They hunted in  Pickering Valley in Chester County, Pennsylvania, a land of steep and rolling hills, pasture land, large dense woods, ripping streams, and overgrown lanes. In short, it was idyllic.

During a Skycastle hunt, Elizabeth would be seen in her white duck skirt, long green knee socks, and a green coat with a crimson collar, the proper attire worn by the MBH (Master of the foot pack). Just as likely, the bare patch of skin between her skirt and the tops of the socks would be scratched and probably bleeding a little. Mind you, this was the nature of Basseting: Following a pack on foot through briars and other sharp vegetation.  Elizabeth’s hounds were working Bassets, a breed developed in the rugged Vendée to have a harsh coat as protection against brambles and thorns. Elizabeth’s knees, of course, didn’t have the same protection.

Wanting to improve the working ability of her pack, Elizabeth acquired an English Hunting Basset outcross from the Tewksbury Foot in the 70s. She rather liked the rough-coated throwbacks that occasionally turned up in a litter, and that probably wet her appetite to get more of the same. Elizabeth imported Petit Basset Griffon Vendéens from England and France. Some say it was to cross with her hounds, others write that it for the purpose of creating a working pack of PBGVs, but either way, Mrs. Streeter was the first to bring the breed into the United States, and the hounds were brought in as hunting dogs.

Elizabeth also whelped the first litter of PBGVs in the United States, and bred them only when it was necessary to add to her pack. Today, the Skycastle pack consists of only purebred PBGVs.  Skycastle French Hounds was taken over by Jim Scharnberg in 1987 when Mrs. Streeter passed away, but sadly, he, himself, died in 2019.  We assume that someone else has taken over the reins of the pack, but to our knowledge, Skycastle French Hounds remains the only pack of working Petit Basset Griffon Vendéens in the country. In France, too, the PBGV is bred for its original purpose: To hunt game by scent and pursue the art of ‘Venery ‘ (defined as man hunting with the use of a hound).

Image: DogBreedsWiki/Attribution needed and happily credited upon receipt of information