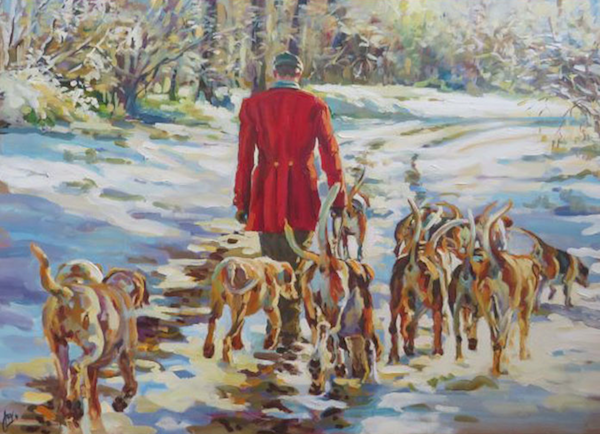 It makes complete sense that different hunt countries require different hunting qualities in a dog, one reason the longer legged American Foxhound was developed after its English counterpart struggled in American terrain.  The two breeds, however, share a “culture” unique to the fox-hunting world, and that includes its lexicon. From “babbler” and “billet” to “hark” and “holloa,” there are words that might baffle an outsider to that orbit. There is a word, however, that most of us know, but it’s a word we associate more with equines than dogs, and the word is “stallion.”

A Foxhound or Beagle “stallion” is just what you think it is, a dog at stud, but in the case of Foxhounds and Beagles, they can be referred to as “stallions.” We came across an article in Baily’s Magazine of Sports and Pastimes, Volume 85 that illustrates its usage: “There was the stallion hound Dryden, then only six years, and thought by a very able huntsman to have been the best hound ever seen in Leicestershire.” The article appeared in 1906.

Lest you think the term is archaic, however, we came across another article appearing in a 2019 issue of the publication, The Field, in which the following sentence appeared:  “Sometimes a great working stallion with a fantastic voice and nose might be slightly too heavy for the speed merchants but those who use such a dog will be rewarded.”

Granted, “stallion” may not be the word that most preservation breeders use, but we wanted you to be aware of its existence and usage since we know that dog people tend to be perpetual students.

We choose to end on a humorous note, this made easy by another article we found in The Field entitled: “The Naughtiest Gundog: Could it be yours?” Hunters and certain breed owners may get a chuckle out of it.

Image: “Snow Day” in oil on canvas by Debbie Harris is available for purchase along with her other fine originals and prints here.