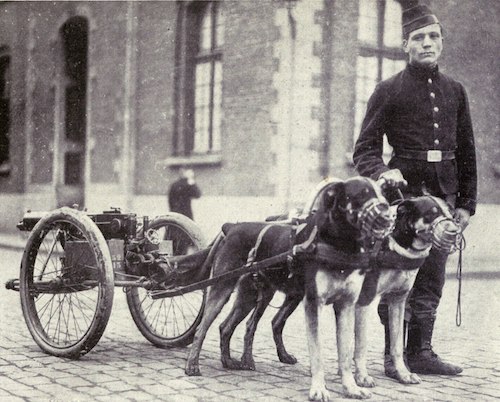 We have always liked introducing you to breeds with which you may not be familiar, and if you’re thinking that the Belgian Mastiff is one of the rare breeds we trot out to enthrall you the way they do us, you would be half right.  The Belgian Mastiff is extremely rare, but mostly because many people regard it as extinct.

This large, brawny dog was once used for laborious jobs such as pulling carts and guarding farms. They often replaced horses for people who couldn’t afford one, and indeed during WWI, the Belgian army used the large strong dogs to pull small gun carriages such as the one seen in the photographs.

In this photo, the dogs are seen harnessed and ready to pull an iconic gun that was called a Maxim gun, iconic because it was Great Britain’s first machine gun, and the grandfather of all such guns that followed it. The gun itself weighed sixty pounds, and the Belgian Mastiff was up to the task of pulling it. Indeed, these dogs also pulled some of the gun’s ammunition weighing up to 200 pounds, and they did so for long distances at a 4 or 5 mile per hour clip. No problem. The website, Historical Firearms, adds, “The dog teams were attached to most Belgian line infantry regiments with each battalion with 6 guns, split into 2-gun sections – each battalion had 36 dogs for the 18 gun and ammunition carriages.   The machine guns could be brought into action very quickly and it was said that the dogs were so well trained they would remain quiet and patient in their harnesses until it was time to move again.” 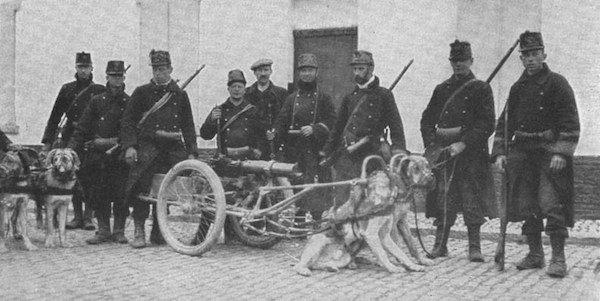 As automotive technology eliminated the need for canine labor, these dogs, already thinned in numbers by the war, began to vanish.  Why we mention the breed here is that there are those who say they’ve found living specimens of the breed, and there is now a movement afoot to resurrect the breed.

And here is where we confess to being puzzled. While there are several references to the breed’s “extinction,” there are many mentions on-line of the Belgian Mastiff (also known as the Belgian Drafting Dog) as being alive and kicking. Indeed, it’s included in the list of currently recognized breeds by the Belgian Kennel Club (that said, the breed appears on the FCI’s suspended list).

In fact, in November, 2003 an admirer of the breed, Alfons Bertels from Duffel, introduced a dog he called “Bacon” as a possible descendant of the Belgian Mastiff at an international dog show in Kortrijk and Brussels. Mr. Bertels, along with G. Glineue de Boussu, had started a reconstruction program in the late 1980s using rural dogs they believed to be descendants of the original “Matin Belge.” They  crossed the dogs with English Mastiffs, Bullmastiffs, Briards and Belgian Sheepdogs, but whether this modern incarnation of the breed is what the Belgian Kennel Club has accepted is unknown to us.

A website was launched in December, 2019 with the aim of reconstituting the Belgian Mastiff via a breeding program carried out in close collaboration with the Royal Society Saint Hubert, and the scientific committee of the Royal Kynological Union Saint Hubert.  We encourage you to read more about this, especially the “about us” page.

By all accounts, this breed dating back to the 19th century was loving with its family, but intolerant of strangers, and certainly not for an inexperienced owner. We will watch its progress with interest.

6 thoughts on “The Belgian Mastiff”