Gorgeous writing.  The best writers don’t write a string of words so much as craft sentences charged with impressions that evoke a mood. One of the best out there is, in our estimation, Louise Penny, whose series of mystery novels are anchored by the character, Chief Inspector Armand Gamache. The eighth of the series, The Beautiful Mystery, focuses on a murder that occurs in a monastery housing Gilbertine monks, an order thought to have died out centuries before. Halfway through the book, the appearance of a young Dominican monk sent from the Vatican on a mission from the Congregation for the Doctrine of the Faith (today’s incarnation of the Inquisition) rattles the Gilbertines. As another character explains, it’s not for nothing that, in Latin, “Dominican,” or Domini canis, means “The Hound of the Lord.”

The Dalmatian’s roots are somewhat of a mystery, but why the breed is associated with an order of monks may be less so. It is said that the mother of St. Dominic, the founder of the Dominican Order, struggled with infertility, and as she was making a pilgrimage to the Abbey of Santo Domingo de Silos in Spain, she dreamt that a black and white dog jumped from her womb holding a torch, and set everything around them on fire. Soon after, she conceived her son Dominic, and named him for the 11th century St. Dominic of Silos, whose abbey she had visited. The dog was seen as a symbol of Dominic, and his mission to set the world on fire. Henceforth, the teachings of Dominic have been symbolized by this dog dream, and the Order itself has depicted the Dalmatian in various forms of church art.  Pope Honorius is said to have proclaimed the Dominicans as “watchdogs of the Lord,” and the order borrowed the black and white coat of the Dalmatian into their monk’s robes: A white robe, white hood, and a black cloak thrown on top. 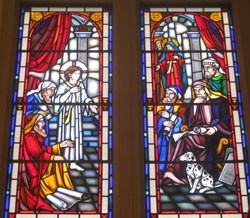 A fresco in the Spanish Chapel of Santa Maria Novella in Florence, Italy painted around 1360 shows a spotted dog of the Dalmatian type, while the image at the right comes from the Holy Rosary Church in Portland featuring depictions of the mysteries of the Rosary. Even today, the Dominicans associate the breed with themselves: Our thumbnail image comes from the website of the Dominican Friars of England & Scotland, and we appreciate their sense of humor. Their blog is called Godzdogz.