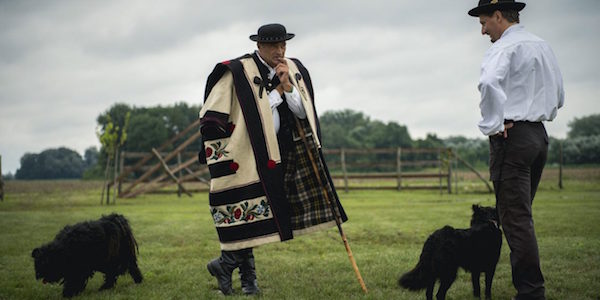 Back on September 16, 2016, the Hungarian Ministry of Agriculture published legislation naming the nine dog breeds indigenous to Hungary. A month earlier, the same Ministry disclosed that a gene bank had been established with the goal of preserving and ensuring the development of the typical characteristics of these breeds, and aiding in long-term breeding plans at national breeding centers. On the face of it, a gene bank would be a boon to Hungary‘s native breeds given the incredibly small gene pool of many of them. Still, we were a little nervous about government involvement in breeding purebred dogs, and to date, have no information on how things are progressing with this program.   We mention this as the backstory to this photo which appeared on the on-line version of DailyNewsHungary and is credited to MTI (you can follow their Facebook page here). Can you name the two breeds seen with this traditionally garbed Hungarian Shepherd?

You probably picked the Puli out right away (dog at the left), and some of you may have also spotted the Mudi at the right, a rarer breeds even in Hungary. A few years ago, it was estimated that there were only a few thousand Mudik in the world, Finland following Hungary as the country where most of these dogs can be found.   Mudi owners claim the breed is incomparable for its versatility and intelligence, others going so far to say that this breed learns at least as fast as a Border Collie.

Pedigree breeding only started in the second half of the 19th century, and prior to that, Hungarian sheepdogs were divided into two categories: Large and small. For breeding purposes, the small dogs were divided from the big ones (such as the Kuvasz and Komondor), but the small ones were sometimes interbred. Early cynologists studying Hungarian dogs seemed focused on the Puli and Pumi, but it wasn’t until Dr. Deszö Fényesi, director of the Museum in Balassagyarmat, that the Mudi was bred for its own characteristics, and it was Fényesi who gave the Mudi its name.  Ironic since some believe the Mudi may be the oldest of the Hungarian sheepdogs.