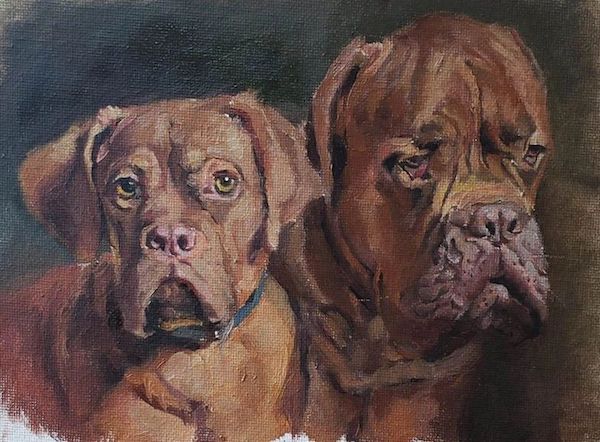 On, those glorious facial wrinkles that “drape” the stop and eyebrows of a Dogue de Bordeaux.  At one time,  however, they were problematic for being overdone, something called a “hypertype” problem. This was, afterall, not a Neapolitan Mastiff.

The FCI standard was updated in 2009 to make a distinction between the standard, and a “more is better” approach to type. The old FCI standard read, “The head is furrowed with symmetrical wrinkles, each side of the median groove. These deep ropes of wrinkle are mobile depending on whether the dog is attentive or not.”

More isn’t necessarily better, but neither is the other direction.

The breed’s head has always been an important aspect of breed type, and the AKC breed standard indicates in the first paragraph that “a massive head with proper proportions and features is an important characteristic of the breed.” It goes on to say, “His serious expression, stocky and athletic build, and self assurance make him very imposing.”

We focus on the words, “serious expression” and circle back to the wrinkles because a Dogue without them doesn’t look serious, and that makes the wrinkles an essential part of breed type. The AKC standard still contains the phrase, “These deep ropes of wrinkle are mobile depending on whether the dog is attentive or not.”

And finally, there is The Kennel Club in England. Its standard differs subtly from the aforementioned standards. It reads, “The head is slightly furrowed with fine symmetrical wrinkles on each side of the median groove, but without excess. These are mobile when the dog is alert.” You may have noticed that it omits the mention of “deep ropes,” as well as their presence whether the dog is attentive or not.  The Kennel Club also adds that “skin is thick and loose fitting, without excessive wrinkles,” and alerts judges that “excessive amounts of loose facial skin with conformational defects of the upper and/or lower eyelids so that the eyelid margins are not in normal contact with the eye when the dog is in its natural pose.”