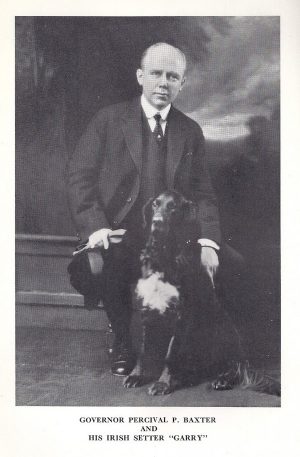 When it comes to Irish Setters with a high profile in the world of politics, most of us might think of the White House. At least three American presidents are known to have owned Irish Setters during their time there, including Harry Truman (“Mike”), Ronald Reagan (“Peggy”), and Richard Nixon (King Timahoe, arguably the most famous White House Irish Setter of them all).

The most beloved Irish setter belonging to an elected official, however, may have been Garryowen (or Garry II), who belonged to the governor of Maine from 1921-25, Percival Proctor Baxter.  Garry was already part of the Baxter family when his owner became governor, and the pair were so often seen walking near the State House that kids would wait along their route to pet Garry or shake his paw.  Garry had his own couch in the governor’s office, and was included in Baxter’s privately published book at his dogs, “My Irish Setters: “Garry is my constant companion in the Governor’s House and in my office at the State Capitol. He goes back and forth with me between Portland and Augusta both by train and automobile, and understands the duties of the Governor’s Office as well as could be expected of any dog.”

When Garry died while Baxter was in office, the devastated man ordered the flag at the State House to be lowered to half staff; the act made headlines around the world for the fury it caused among several veterans’ groups who thought the order was disrespectful. Still, Baxter, should be remembered not only for his love of animals, but for his forward thinking at the time:  He sent stray dogs to prison as companions for the inmates, he set aside 200,000 acres of forest land and deeded it to the state of Maine in perpetuity (making Baxter State Park the third-largest state park in the nation, and the largest ever given by an individual), and visited Portland livery stables every Christmas Eve to give the horses a feast.

Percival Baxter died a bachelor in 1969 at the age of ninety-two, all his Irish Setters buried in the animal cemetery on Mackworth Island, the family’s summer estate in Casco Bay which today, is the Governor Baxter School for the Deaf – his gift. As for his decision to lower the flags to half mast to honor Garry, a note he wrote that was found in 2001 read, “Good old Garry II was the first dog in history to be thus honored. His spirit lives on and through him, dumb animals the world over will be treated more kindly and mercifully.”

8 thoughts on “The Irish Setter That Made Headlines”