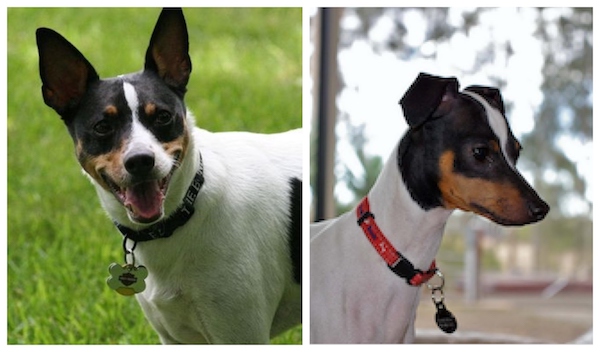 Admittedly, there aren’t many Japanese Terriers outside of Japan, but there is the odd Rat Terrier in Japan which is where, we’re told, the mistake can be made. The error, we suspect,  comes as a result of the first thing many of us notice about a dog – it’s color.

Large patches of one or more colors in combination with white (also known as pied patterning) is acceptable in a Rat Terrier, and those colors can be with or without “tan points,” and include the predominate black, or chocolate, red, apricot, blue, fawn, tan, lemon, or white. The Japanese Terrier (also called the Nipon Terrier) is a tricolored dog –  white with black spots; white with black or tan markings on the body. The Japanese themselves, refer to the Japanese Terrier’s black facial area and white body as “menkaburi donuke,” or “face masked, body exposed.”

Japanese Terrier images found on Pinterest and happily credited upon receipt of information. “Shortly,” a Rat Terrier image by Ranveig through Wikicommons.