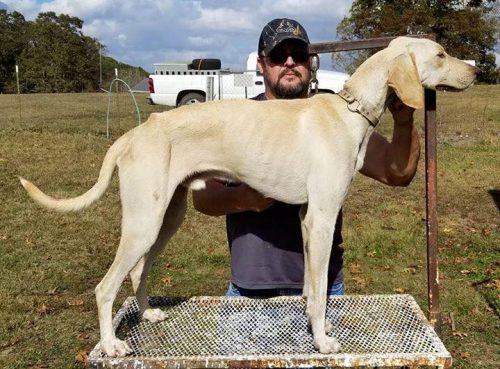 On the first of July in 1858, a pair of tan colored puppies, a boy and a girl, arrived in a crate in Sparta, Georgia. Their arrival was met with interest and no lack of commentary. After all, these were the dogs that prominent local hunter, Colonel Miles G. Harris, had been looking for to deal with the Red Fox, a clever and fast critter. This fox had been eluding Foxhounds and Coonhounds of the day, including Harris’ own pack of Proctor and Redbones, hounds with ears so long they hung like “window curtains” and “rat tails” that were as long as fishing poles.

At first glance,  Harris’ new pups were met with derisive mocking. Their ears were shorter than was expected, and the rule of thumb at the time was that no puppy could be promising unless its ears were long enough to lap around the nose and be tied into a knot, figuratively speaking. A foxhound wasn’t a foxhound unless it fit that description.  Still, Harris had been gifted the pups by Nimrod Gosnell, a Maryland breeder whose Irish foxhounds,  “Red Tickler” and “Leda” produced them.  Hedging his bets, Harris kept the puppies, but placed them one of his distant farms and waited for them to grow up.

And one day, they were ready. Harris invited fox hunters from miles around to join him on a fox hunt and bring their own hounds.  Harris’ young Irish yearlings were coupled,  the other hounds were likewise readied, and when a fox was unkennelled, off they all went.

The other hounds were no match for Harris’ new dogs.  In the book, “Fifty Years With Fox and Hounds” written by George J. Garrett,  he describes the scene: “In round numbers, too many of the hounds were “leg weary” and had enough, now serving as “bodyguard”.  Some had gotten down to a “slow trail”, and the remainder were leading for a “ticket home” by howling.  The chop and yelp of two hounds were now astonishing the men, for they were pumping the wind out of their fox and nothing could head them off.  Their earnest and quick-chorded notes were full of meaning… in about an hour’s run,  no other hounds were in “smelling distance.”

We should mentioned that Harris had named his two pups, “Mary” and “July.” Sadly, Mary died before she was able to have any puppies, but this just made July’s value increase as hunters from surrounding counties and states brought their best bitches to be bred to him.  He proved to be prepotent for his exceptional drive and stamina, and thus began the strain of American Foxhound known today by the name of its progenitor, “July.”

In the late 1860’s, Col. Harris’ hearing was failing, and his hunting days were over. He sent old July and six other hounds to friends in Putnam County with instructions in writing that the hounds be owned in common for the purpose of making suitable breedings. It was expressly understood, however, that old July was simply on loan, and “the title to him shall never pass from my hands.”  A Captain Ham Ridley of Jones County had July only a few months in 1872 when the famous foxhound passed away.  July was buried in Captain Ridley’s orchard, a marker was placed over his grave.

Today, a marker stands at Mile Marker 5 at Oakland Plantation in 16 N.W. of Sparta. It is the only known historical marker honoring the birthplace of the July Foxhound lineage in July of 1858. 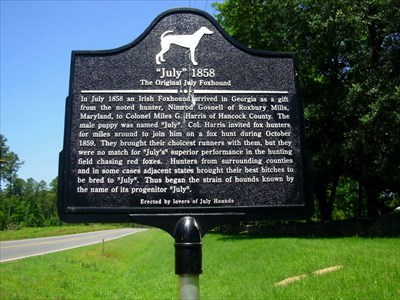 We conclude with a poem written by George Garrett in 1938. It’s called, fittingly, “July’s Poem.”

Have you ever seen the grave and the stone erected on it,

Have you ever read the words so roughly hewn upon it?

Have you ever paused to think upon the reason why

Such an honor is here paid a dog; a hound known as July?

The Putnam woods, the bending trees have heard the music of his voice.

To “Turner’s Old Fields” the huntsman road and there with nature they’d rejoice.

What? Hold! Yet huntsman of the field, July has struck a living trail,

The trail is cold though it matters not, for see, July is in the van,

He will have that fox within an hour, so hasten all who can.

Our image came from the Rocket Ranch July Kennel Facebook page which hasn’t seen activity in several years. This July Hound is owned by Brian Lamey.