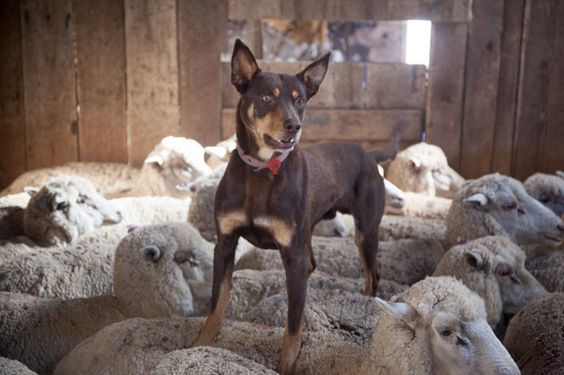 Australia, it’s been said, rode on the sheep’s back, but quite literally, the Australian Kelpie really did.

Early in the country’s history, convicts and Chinese were employed as shepherds to guard sheep pens at night, but when the vast areas of land in New South Wales and Victoria opened up, sheep numbers exploded. Some “stations” (ranches) ran over a quarter of a million sheep over two million acres, and having men do this work was wholly impractical. They had to have dogs to handle sheep in such large areas. Enter the Kelpie.

The conformation of this breed was fixed by the physical requirements of the work it did, and in particular, the area above a Kelpie’s pelvis, the rump. A working Kelpie must make sharp turns, often in the confines of a pen. He must have great bursts of speed to turn back breaking sheep, and have rapid changes in direction. These movements require a slightly steeper slope to the rump than some other breeds. The dog must also have a well turned stifle which is an absolute essential for proper rear-propelled drive. Without it, the dog’s action may be stilted, and that keeps the dog from covering a lot of real estate efficiently. Together with the rump, this structure enables a Kelpie to get his back legs under him and turn on his hindquarters.

The Australian economy depended upon the wool industry, and without a dog that could perform the work of several men, this industry may very well not have been so prosperous. Before 1840, Australia was producing more than two million kilos of wool each year. The success of the wool industry made many average people immensely wealthy and by the 1880s the wool business was booming. These days, Australian sheep producers tend to focus on meat production of meat,  but Australian merino wool is still much in demand by the fashion and textile industry. The Australian wool industry produces more than 355 million kilograms of wool worth over two billion dollars, and most definitely, Kelpies are still being used to work sheep in Australia

Image: Photo found on Pinterest and happily credited upon receipt of information