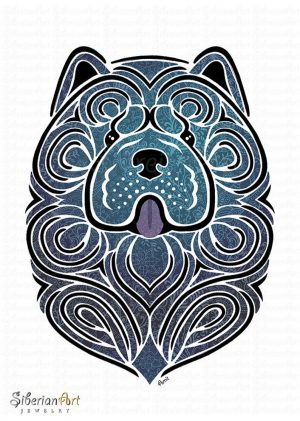 What do lilac, butterscotch, silvertip, lavender, champagne, silver, chocolate, and blue-cream all have in common?

They are creative names (and probably marketing ploys) given to the colors that the AKC recognizes in the Chow Chow. Those five colors are black, blue, cinnamon, cream, and red, all determined by four specific known genes that dictate the color of the coat, and all to be judged on an equal basis.

Another time, we’ll talk about the other colors, but for now, we focus on the blue, the color thought by ancient Chinese and Mongolians to be the color of the finest Chow Chows.

To be clear, blue Chow Chows aren’t actually blue, but steel gray. The color can range from dark bluish gray to a faded silvery-bluish tint, and some dogs have muzzles and legs that can have a mixture of “salt and pepper” tones or light and dark blue hairs that makes the dog’s coat almost look frosted. Like a black Chow Chow, blues can also “rust” in the sun, which is to say their coat might get rust or brown color hairs.

At this point, we change direction and head to 19th century England where the first blue Chow Chow in the country was owned by Lady Granville Gordon. It was one of her dogs, “CH Chow the VIII, upon whom the first official breed standard was based, and who became the first ever Chow Champion in 1895.  Lady Gordon was also instrumental in getting the Kennel Club to recognize the breed as the “Chow Chow” instead of as a ‘Foreign Dog.’

Her daughter, Lady Faudel-Phillips (Armyne Evelyn), later founded the famous Amwell kennels and became a leading exhibitor of her day. Interestingly, when the Kennel Club had to deal with a situation in which the secretary of the Chow Chow Club (the very first Chow Chow Club founded in the world) failed to pay £15 owed for a show guarantee, then resigned and refused to hand over the club’s paperwork, Lady Faudel-Phillips left the club and took a group with her.  In December of 1911, the group met at the Pet Dog Show to found a new club they named the “Chinese Chow Club”  (with only one “chow”), which was recognized by the Kennel Club. That club is currently the second oldest Chow Chow Club in the UK.

Armyne Evelyn Faudel-Phillips died in 1942 at the age of 62, and as a prominent breeder, exhibitor, judge, and breed authority, she left behind a legacy of achievements within the breed.