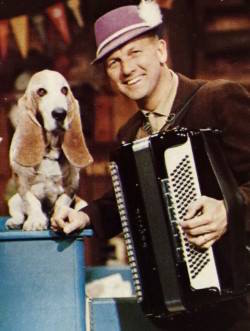 In light of a recent post about Kodiak, the acting Newfoundland, we thought we’d share another celebrity, albeit a two legged Seattle local whose sidekick was a Basset Hound.  The local celebrity’s name was Stan Boreson, the “King of Scandinavian Humor” an entertainer who appeared for 18 years on “Kings Clubhouse,” a Seattle kid’s show of the 50’s and 60’s.  Stan passed away in this past year, but memories about this gentleman – and his five Basset Hounds (all named NoMo), live on through his son who posts on Stan’s Facebook page.  We can’t improve on a post that appeared a couple of months ago on that page, and we encourage you to rummage around it because there are some lovely memories of a gentler time, and some terrific pictures of NoMo:

“Even though my dad’s show has been off the air almost fifty years, he still has a few fans left. Die-hard Seattleites who remember early television in its purest form made up of a handful of entertainers like J.P. Patches and Wunda Wunda…in between an Indian Chief test pattern.

This was the Northwest before all the hype. Way before Starbucks, Amazon, Cobain and Hendrix. Back in the day when making a full rotation around the Space Needle felt edgy.

Here’s a little family memory from the 60’s…

Most of my friend’s fathers dressed in business attire and held jobs at Boeing or in some downtown high rise. They carried umbrellas and briefcases and strapped on galoshes over their wingtips. My dad was a little different. Each morning he put on a bright colored sport jacket and plaid pants. Then he made trips to the car with all the things he would need for the show. First load consisted of his sixty-pound accordion, wardrobe changes, props, and whatever script he might have worked up the night before. Then came his sidekick, Nomo (short for No Motion), a Bassett hound who spent most of her days sleeping in front of the heat vent. True to her name, she rarely was in motion, especially if it meant distancing herself from the warming zone. She would ride down to KING TV in the passenger seat of the car wearing four high top KED tennis shoes and maybe a boa around her neck.

One day my dad caught me staring at a huge watercolor of NoMo hanging in his office. I remember marveling how the artist captured her bloodshot eyes, even adding a little Alpo to those matted floppy ears. Dad must have thought I was going to unleash my teenage irreverence so he stopped me short.

“That dog gave you braces!” He said.

I realized at that moment that he was telling the truth…and I needed to lighten up. Without orthodontics, my teeth would still look like God fired them down with a bad rotator cuff.

Growing up with a dog as a breadwinner really drives home the idea that America IS the land of opportunity! If a low-riding Hush Puppy can bring home the bacon, I would have to up my game.”

We came across this video which offers a few glimpses of NoMo:

We've never had to write something like this before.

Experience has taught us that when certain dog breeds have been featured as a Purebred of Interest in the past, there are those individuals who feel entitled to unleash their worse behavior at the expense of owners interested in educating others about their breed.

Tomorrow, we are featuring the American Pit Bull Terrier, a breed recognized by the United Kennel Club, the first registry to do so.

Back when we asked you to nominate breeds for this feature, the APBT got a lot of votes. It remains to be seen if tomorrow, the breed's owners and breeders show up to share their breed because another thing we've learned is that people can be enthusiastic about wanting their breed to be highlighted here, but when it comes time to actually sharing their experience and photos, not so much.

One thing is certain. We will have zero tolerance for negative comments tomorrow. If you "go there," your comment will be deleted as fast as we can find it or are alerted to it.

APBT owners, please wait until tomorrow to share your photos. The first question come in the morning with questions posting every hour.