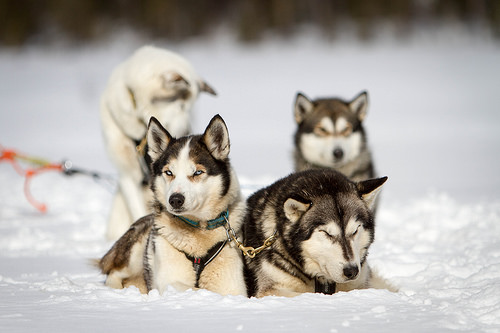 In the last decade, the breed of dog used by most dog mushers in Alaska isn’t really a breed, it’s an amalgamation of breeds that mushers tap into for different attributes. That “blend” is called an “Alaskan Husky.” When it comes to purebred dogs, no breed has won more racing championships in Alaska than the Siberian Husky.

William Goosak, a Russian fur trader, had spotted the potential of the sled dogs used by the Chukchi maritime people and brought them to Nome, Alaska during the 20th century Yukon Gold Rush, initially as sled dogs. In 1909, he raced his dogs in the 408-mile All Alaska Sweepstakes that had long been dominated by teams of Alaskan Malamutes. The people of Nome referred to the Siberian Huskies as “Siberian Rats” because of their size (they were, on average, 40–50 pounds as compared to 75–85 pound Malamutes) and in so doing, proved that it’s better to keep one’s mouth shut and be thought a fool than to open it and remove all doubt.  Goosak’s “Siberian rats” outran many of the native dog teams, finishing a respectable third that year. Pound-for-pound, the Siberians pulled faster than the Malamutes who were bred to haul freight. Because of the Malamute’s longer stride, the Mals covered more ground with each stride, but their mass made them overheat as compared to the smaller Siberian Husky that generated less heat, but with the same skin area for dissipation, they maintained temperature.  With just the right size, and just the right angle of pelvis, back length and shoulder width to enable the dog to have the longest possible stride, the Siberians loped, always keeping at least one paw in contact with the snow to haul the sled along.

At the 1910 All Alaska Sweepstakes, Nome based musher, Leonhard Seppala, took first place with a team of Siberian Huskies. His triumph would be remembered 15 years later in January 1925, when Nome’s Board of Health was confronted with a diphtheria epidemic of diphtheria, and he and his dogs were asked to make a serum delivery. The rest, as they say, is history and their accomplishment made Siberian Huskies famous.

3 thoughts on “The Last Laugh Goes to the “Siberian Rats””