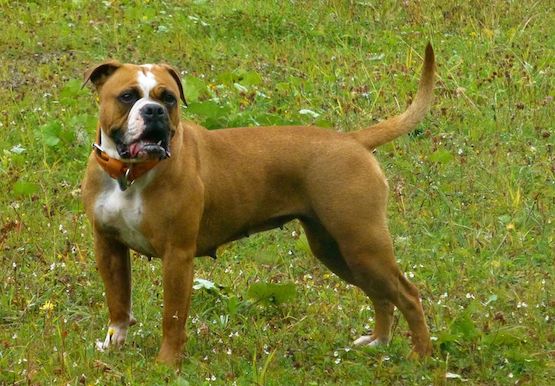 To better understand the Leavitt Bulldog, one must go back to the 1970s and David Leavitt’s vision.

Looking at archival images of dogs from the 19th century made Leavitt want to recreate a dog that would be as close to Regency-Period bulldogs as possible. To that end, he set up shop, so to speak, in his Pennsylvania kennel in 1971. Using a scheme developed from a cattle breeding formula by Dr. Nathan Fechheimer (Dr. Fechheimer’s laboratory was the first in the world to enter into cytogenetic studies of farm animals), Leavitt crossed English Bulldogs, American Bulldogs, American Pit Bull Terriers and Bull Mastiffs to recreate a breed of dog he believed looked like those nimble, athletic 19th-century Bulldogs,  but dogs that were more approachable and had less of the driven temperament of a bull baiting dog. After a number of years and generations of dogs, by 1988 Leavitt produced dogs he called Olde English Bulldogges, or OEBs. In that year, he had reached the 5th and 6th generation of the two lines, a new breed whose bloodline was ½ English bulldog, ⅙ American Bulldog, ⅙ American Pit Bull Terrier, and ⅙ Bullmastiff. 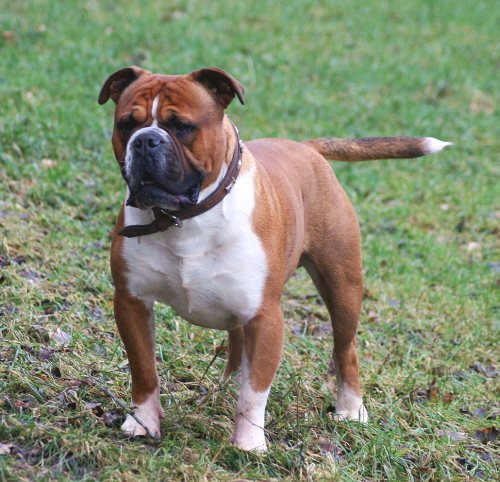 In 2014, the breed was recognized by the United Kennel Club which listed it in their Guardian Dog Group. The breed is described as a “thinking” breed, problem solvers and extremely sensitive, sweet dogs that bond closely with their people. With only half English Bulldog blood, the newer breed is taller and heavier, has a longer muzzle, and there are fewer wrinkles around the nostrils.

Since the 1970’s, however, many people used the Olde English Bulldogge name for dogs that weren’t related to the original lines, and multiple registries serviced these breeders, unfortunate because there was a huge range in appearance and health in these dogs that were a discredit to the original dogs.

Some lines of the Olde English Bulldogge renamed their dogs to the Leavitt Bulldog in 2005 to distance their dogs from the OEB lines that didn’t meet their standards.  Founder David Leavitt stated: “A big reason for my wanting to change the breed name is that there are far more Alternative Bulldog OEB’s than true ones, and most of these dogs don’t have the appearance of the old working Bulldog. I admit it’s my pride that has driven me to want to make clear these heavy dogs aren’t my creation. I couldn’t force them to change and the logical answer was to change a name that really wasn’t correct for the period we are trying to recreate anyway.”

We can’t honestly say if the Leavitt is regarded by its fans as a variation of the original Olde English Bulldogge, or that it might as well be an entirely different breed, but in the interest of sharing information, we thought it worth mentioning.

Image: “:Leavitt Bulldog” by Freedombulls is licensed under CC BY-SA 3.0