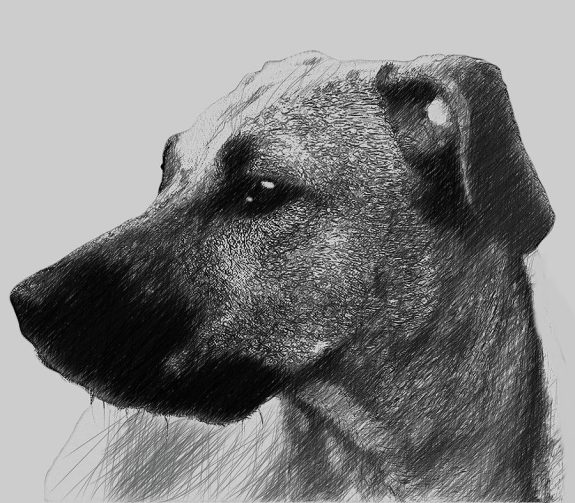 A recent post introduced our series on the different bloodlines of Black Mouth Curs, lines developed by individual families more than 100 years ago. We started with the first line of Black Mouth Curs to be registered as such, the JD Howard line. In this post, we’ll do a brief exploration of the Ledbetter line, and begin by explaining that to this day, and depending on the “neck of the woods,” a breeder may sometimes refer to their Mountain Cur by its original bloodline name. Ledbetter is one of those original lines.

For those just tuning in, the ancestors of Mountain Curs were initially brought to the United States by Europeans who settled mostly in the states of Ohio, Virginia, Kentucky, and Tennessee. Some called these canines the pioneer dogs of the Southern Mountains. Frontier families had a hard scrabble life, and lived only on what they could grow and hunt; protein sources included rabbits, raccoons, boars, and squirrels. The versatile Cur was developed, a dog that would guard home and hearth, but also hunt, tree, hold, or catch game for food. Frankly, the courage of these dogs saw them go up against critters much larger than themselves, and those animals provided fur for hats, blankets, and coat. It’s said that without the Curs, pioneers would have never been able to settle in these mountains. For obvious reasons, few curs were sold outside the family.

When the United States entered WWII, millions of people left their rural homes to work in city factories, and by the end of the 1940s, Curs became rare. Upon the return of these soldiers and factory workers were people who saved the breed they knew and loved. Among them were Hugh Stephens and Woody Huntsman, both of Kentucky; Carl McConnell from Virginia, and Dewey Ledbetter of Tennessee. These men set the Mountain Cur breed standard, and in 1956, they founded the Original Mountain Cur Breeders’ Association.

About Dewey Ledbetter: Born in 1906 in Overton County, Tennessee, Dewey had grown up with Curs, and he married Verda, a woman who also had grown up with the dogs. By most accounts, Dewey was a walking encyclopedia about Curs, and was the prime mover in the formation of the Mountain Cur Club.

Ledbetter’s curs were usually 35-40 pounds, and brindles. They were normally silent on track, and barked only when a squirrel was treed. It’s been challenging to find much more about the Ledbetter curs, and perhaps the random comments we found on forums are accurate: Ledbetter curs essentially died out, and those that didn’t were absorbed into the Kemmer Stock Mountain Curs.

We do know that Dewey was hurt severely in a logging accident to the extent that he lost the use of his right arm and could no longer write. The book he wanted to pen about the breed was subsequently finished by Verda who transcribed his thoughts: The History and Stories of the Original Mountain Cur.”

Dewey died in 1979,  and Verda finished the book the following year. According to Verda’s Introduction, the book has three parts: An account of the formation of the Cur Club, and the associated “difficulties and discouragements;” the story of the Cur Club in photographs, and finally, the last part that was based on Dewey’s own writings and included contributions to Cur Club Yearbooks, unpublished writings, and other magazines.

As of 2014,  Mrs. Helen Hoover, Ledbetter’s daughter, was talking to Cur owners, but sadly, we know little more. If we have this wrong and Ledbetter Curs are still out there and happen to read this, we hope one of them will help us correct any error, and flesh out the rest of Dewey’s story.

We did did find something about a Ledbetter Cur who did Dewey proud. Limbgripper Jack, a Ledbetter Mountain Cur from Jime Rhea’s kennel, won several Grand National field trial championships and every major award in the sport, including dozens of state, regional, U.S. and world championships.

Image: Black Mouth Cur by Bob Smerecki is available as fine art, and in home decor and lifestyle items here