In 2019, a ceremony was held by the Seattle City Council to honor individuals who had worked with New York City search-and-rescue efforts after 9/11. They included police, doctors, engineers, and public-safety personnel, all working with Puget Sound Urban Search and Rescue. Among those invited were critically important members of rescue efforts, all of them four legged, and one of them was so small that many people in the audience has to stand up to see him. His name was Ricky, a dog who weighed slightly more than a one pound bag of flour.

When we see photos of the Search and Rescue dogs working the rubble of the World Trade Center, we typically see images of dogs like Bretagne, a Golden Retriever, “Boomer,” a Dogue de Bordeaux, and larger breeds like Labrador Retrievers and German Shepherd Dogs, as well as breeds a bit smaller. There was a need, however, for dogs that could squeeze into spaces too small for other dogs and robots, and that’s where Ricky made his mark.

Ricky and his trainer, Janet Linker of the Seattle Fire Department, combed through rubble for 10 days straight, helping find the earthly remains of several victims. They worked in tandem with another SAR pair, Kent Olson and “Thunder,” a five-year-old Golden Retriever. Ricky would squirm into spots that 64-lb. Thunder couldn’t. “There were a few situations where we had to climb underneath metal beams, and the space just kept getting smaller and smaller,” said his handler and owner, Janet. Ricky indicated a find by standing very still, looking at his handler, all the hair on his body standing up. Thunder, the more experienced of the two, would confirm the find by lying down as his signal to his partner. If either dog made a “live find,” both dogs would bark, but sadly, that never happened.

Ricky was typical dog. He ran, jumped, chewed stuff up and fetched ad nauseum, and sometimes he barked. And barked. And barked. These very traits put Ricky in demand when people were trapped, hurt, or dying. He had proved his ability when he got  his Basic Level certification in 2000 after proving he could search through piles of concrete at a site half the size of a baseball field, find three victims in less than ten minutes, and do it while ignoring the noise of heavy equipment, and the lure of cats in cages. In 2001, Ricky was the smallest Search and Rescue dog (SAR) in the United States. 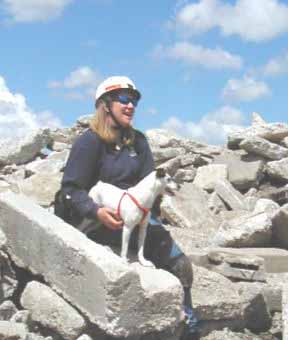 In addition to finding multiple victims in buckled subway tunnels and stairwells they recovered personal items, such as jewelry and clothing that were given to the victims’ families.

When their rotation was up, Ricky and Janet went home. Toward the end, Janet later said, Ricky got tired. Tired of working, tiredof the noise, the commotion, the power and construction equipment constantly running. She had never seen Ricky as mellow as he was when he got home.

As of 2011, Ricky was deceased, but we lack details of this important little dog’s passing. If anyone knows more, please contact us so we can fill in the rest of Ricky’s story.

We close with a nod not just to Ricky, but to his breed. Ricky was a Rat Terrier, which  he exemplified with his intelligence and versatility. RIP, little man.

Image: A monument that honors all 9/11 SAR dogs stands West Orange, NJ. The four-foot tall bronze dog sits atop a 12-inch slab of granite, and weighs nearly 5,000 pounds. It was designed by Oregon artist, Jay Warren and paid for by corporate donations. The West Orange 9/11 Memorial opened in 2002, almost exactly one year after the attacks. The park overlooks Manhattan across the water. We found it uncredited on Pinterest and will happily provide attribution upon receipt of information.

Read more about the breeds of 9/11 here