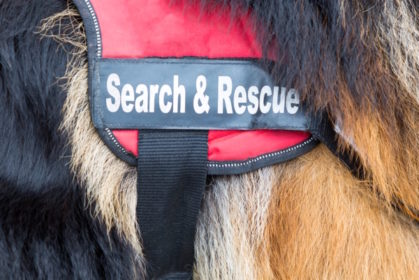 Nearly 10,000 emergency rescue workers were involved in recovery efforts on 9/11, and more than 350 of them were dogs.  They covered 16 acres of land at Ground Zero, a landscape of twisted metal and debris where humans couldn’t go, and at the Pentagon, sixteen to twenty dogs worked areas flooded from sprinklers that ran for 24 hours after the plane’s impact. Surfaces were still so hot that huge steel fireproof filing cabinets had roasted in the heat. Rescuers and their dogs walked through a soupy mess formed by charred, wet paper. All the dogs worked tirelessly, often blinded by smoke, and like their human counterparts, they battled exhaustion and emotional distress.

Another 300 therapeutic dogs were deployed to comfort workers, aides, and survivors,  dogs like Tikva, a Keeshond.

The aftermath of 9/11 was the largest deployment of SAR (search-and-rescue) dogs in U.S. history, and these heroic canines came in many breeds. To our knowledge, at least 16 breeds were deployed as Controls and/or at the World Trade Center, Pentagon and Staten Island Landfill.  Twenty were German Shepherd Dogs, seventeen were Labrador Retrievers,  two were Belgian Malinois, eleven were Belgian Tervuren, three were Border Collies, and six were Golden Retrievers, including Bretagne, the last surviving 9/11 SAR dog who passed away in 2016.  Other breeds that were part of the search effort were an Airedale Terrier, Rat Terrier, Dachshund, Portuguese Water Dog (a dog named Presidio Dutch of Alto Mare, trained and handled by Connie Millard), Bloodhound, Doberman Pinscher, Beauceron, Rottweiler, Australian Shepherd, Hovawart, and a Dogue de Bordeaux. A Doberman/Australian Cattle Dog mix was also part of the search effort. 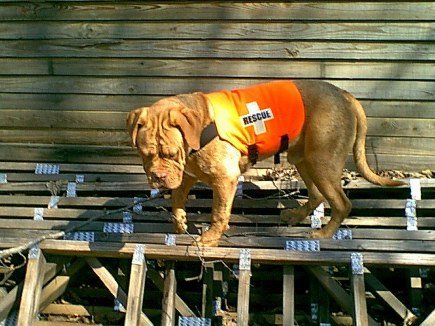 “Boomer,” a SAR Dogue de Bordeaux who served on the search and rescue team at both the World Trade Center and the Pentagon. We learned from a reader that Boomer, aka Cerberus owned by Sandara Church, passed away at the age of 5 1/2 due to respiratory issues

Given the enormous contribution of the dogs on that horrific day, precious few statues honor their service.

A life size statue of “Bretagne,” the Golden Retriever, was erected in the Houston suburb of Cypress at the entrance of the Fairfield subdivision where she spent her life. It’s strategically positioned in front of flagpoles right near the site of a Cy-Fair Volunteer Fire Department station where Bretagne served. 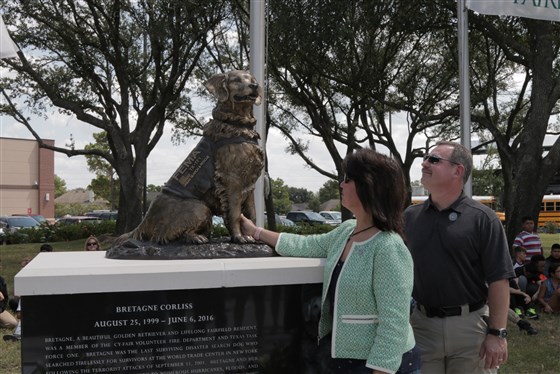 Bretagne’s owner and handler, Denise Corliss, and her husband see the statue of their dog for the first time.

In Lindenhurst, New York was a 300 pound cement statue dedicated to 9/11 rescue dogs. Modeled after “Hansen,” a German Shepherd Dog who spent 150 days searching through the rubble of Ground Zero, the statue was vandalized several years ago, and has since been rededicated. 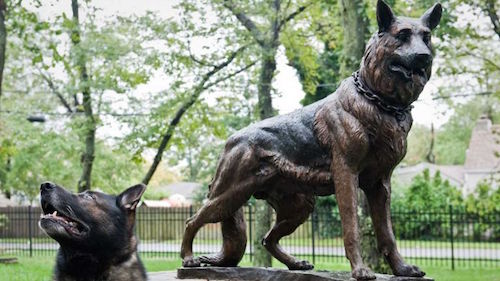 The only other monument dedicated to the dogs of 9/11 of which we’re aware is a four-foot tall, 5,000 pound bronze statue of a a dog that sits atop a 12-inch slab of granite situated in the West Orange 9/11 Memorial park that overlooks Manhattan across the water. Designed by Oregon artist, Jay Warren, the statue was paid for by corporate donations. 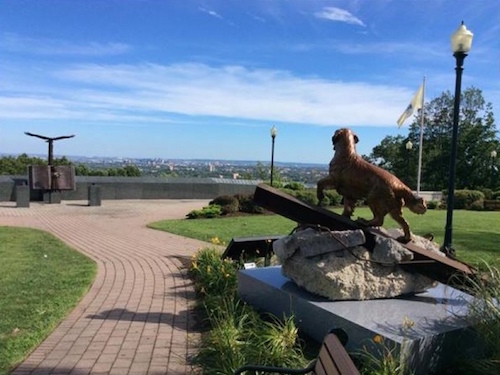 Addendum added 9/11/2022:  Last year, the AKC published a piece entitled, “9/11 Dogs You’ve Probably Never Heard Of,” and indeed, we hadn’t learned of these important dogs until today. It’s well worth the time, read it here.

We came across a poem about these dogs and close with it:

The Insistence of Beauty
by Stephen Dunn

The day before those silver planes
came out of the perfect blue, I was struck
by the beauty of pollution rising
from smokestacks near Newark,
gray and white ribbons of it
on their way to evanescence.

And at impact, no doubt, certain beholders
and believers from another part of the world
must have seen what appeared gorgeous—
the flames of something theirs being born.
I watched for hours—mesmerized—
that willful collision replayed,
the better man in me not yielding,
then yielding to revenge’s sweet surge.
The next day there was a photograph
of dust and smoke ghosting a street,
and another of a man you couldn’t be sure
was fear-frozen or dead or made of stone,
and for a while I was pleased
to admire the intensity—or was it the coldness?—
of each photographer’s good eye.
For years I’d taken pride in resisting
the obvious—sunsets. snowy peaks,
a starlet’s face—yet had come to realize
even those, seen just right, can have
their edgy place. And the sentimental,
beauty’s sloppy cousin, that enemy,
can’t it have it’s place too?
Doesn’t a tear deserve a close-up?
When word came of a fireman
who hid in the rubble
so his dispirited search dog
could have someone to find, I repeated it
to everyone I knew. I did this for myself,
not for community or beauty’s sake,
yet soon it had a rhythm and a frame.