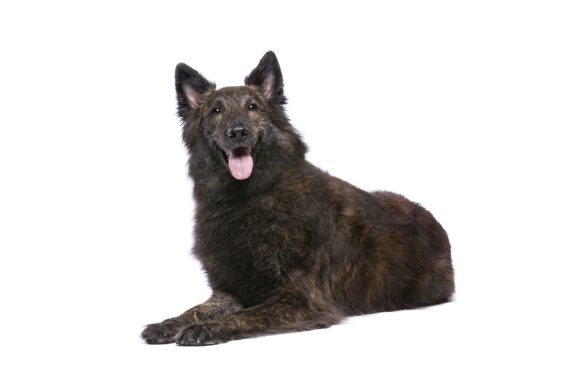 The fabulous Dutch Shepherd comes in three coats: The short-hair, long-hair, and rough-hair, all of which have a woolly undercoat. Such was not always the case, however. In the beginning, there were actually six coat types recognized in the Dutch Shepherd, and two of those were applicable to the longhair: those with a close lying coat, and longhaireds with a coat that stood away from the body. Later, the six coat types were reduced to three: Shorthair, rough hair, and longhair with the close lying coat.

The short-haired version of the breed is by far the most common, while the wire-haired Dutch Shepherd is extremely rare, but our brief focus here is on the long hair.  By the mid-1930s, this hair length variety was declared extinct, and the only appearances of long hairs were the results of short hair breedings.

In 1926, C.A. Kruis wrote: “If the [Longhaired Dutch shepherd] is to be re-established, this will be heavy going, due to the ancestry of the material available.”  A certain Dr. Van de Akker must have felt that the “heavy going” worth the trouble because he secretly worked to recover it.  He didn’t work with “by-products,” but with authentic long haired shepherds he found by traveling the countryside and interviewing farmers who might still own dogs with correct type.

In time, Dr. Van de Akker presented three long hairs of his breeding program at a show (two of them, we believe, were named Prins II and Rana), and thus the long haired variety was entered once again into the breed studbook. In 1979, fanciers celebrated the 40th anniversary of the re-establishment of the longhair, and spoke of the praise that Dr. Van de Akker deserved for laying the basis for re-establishing the coat despite the difficulties and criticisms.

We did find a breeder’s page in which they mentioned that the Longhaired Dutch “remains less responsive to its shorthair variant,” which we confess to not understanding unless it refers to genetics because they add that the number of births listed in the LOF in 2017 was 788 short hair births compared to 26 long hair births. Without knowing how many dogs and how many breedings this entailed, we refrain from comment, but we welcome the input of Dutch Shepherd breeders who surely know more about it than we do.

Readers interested in this particular aspect of the breed should also read The History of the Longhaired Dutch Shepherd Dog by L.F. Triebels that was originally published in NHC Club magazines in 1979.