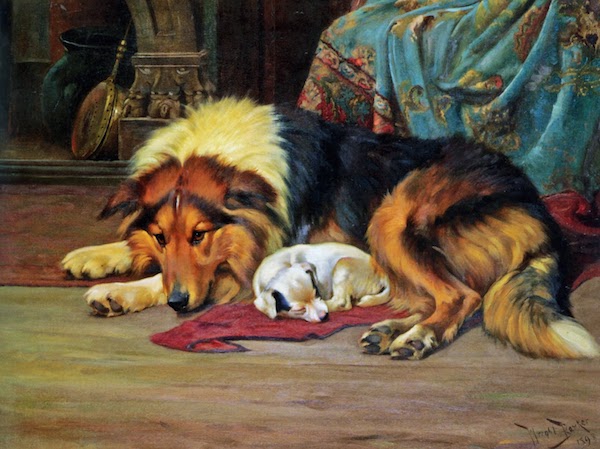 The Ladies Kennel Association in the UK is an all CC Championship dog show held in December of each year at the National Exhibition Centre in Birmingham. Its history began in 1893. The association enjoyed the patronage of Queen Victoria, the first monarch ever to show a dog (though she exhibited only once, and that was to show her Pomeranian, Marco, at Crufts). A more frequent participant was Queen Alexandra who successfully exhibited her Basset Hounds, Pugs, Japanese Spaniels, and especially, her Borzoi. Her dog, Ch. Alex, once won a 500 guineas challenge cup in the breed.

Another active patron was Lady Aberdeen, a Skye Terrier fancier whose affection for the breed was inherited from her father, Lord Tweedmouth (of Golden Retriever fame). In fact, in the late nineteenth and early twentieth centuries, the family was actually better known for their Skye Terriers than their retrievers, and Lady Aberdeen had a particular fondness for the drop-eared Skyes. As an aside, Ishbel, her first name, was an interesting person who was described by historian, Amanda Andrews, as an example of the “new women” who claimed leadership in good works throughout the British empire. Her biography is well worth the read. But we digress.

The list of early Association members reads like a “who’s who” of British society. Lady Lewis was known for her French Bulldogs, Lady Gooch for her Pekes. Mrs. Hall-Walker, wife of Colonel Hall-Walker, MP (member of Parliament) once had her Pomeranians painted by the famous Maud Earl, and the Countess of Chesterfield was a successful breeder of Toy Fox Terriers. Mrs. Hall-Walker was an Elkhound woman, while Mrs. H. D. Greene, the wife of another member of Parliament, was keen on Welsh Springer Spaniels and Welsh Terriers.

You get the idea: English society women took their place in the dog fancy, but it would be a mistake to assume that the Ladies Kennel Association was an excuse to meet friends for tea and crumpets. Among the advances made by the group was that it was the first English show to schedule the Shetland Sheepdog separately in 1909. This generated huge interest, particularly from the Rough Collie breeders of the time, probably because the preferred name of the early pioneers of the breed was Shetland Collie. Vigorous campaigning by Rough Collie breeders resulted in the name change to Shetland Sheepdog, but that is a story for another day.

You might enjoy this clip of the Ladies’ Kennel Association dog show at Alexandra Palace in 1928, or this photo from 1896.