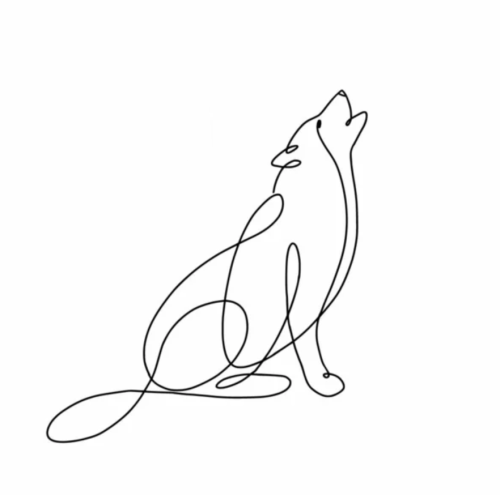 When Robert Peary got to the North Pole (and became the first man to do so), he found a bewildering assortment of sled dogs, and he couldn’t tell one breed from another.  In fact, he is said to have opined that things would be better if all the sled dogs were treated as variants of one major breed.

It didn’t happen, of course. The demands made of sled dogs were the same, but a good number of regionally bred dogs took on the name of the location in which they were found, and neither did they all look the same. Their names include the Old Crow Dog, the Ft. McPherson Dogs, Hay River Dogs, Arctic Red dogs, and others.

These dogs weren’t bred differently to “one up” the dog in the next settled area. Northern people lived in isolation from each other, often far apart, and they bred the dogs they had. This lead to a number of regionalized “types,” several of them breeding true over time and leading to some breeds we have today.

Depending upon the source, the Mackenzie River Husky is one such dog and we mention it in the spirit of education.

Many dog experts maintain that the Mackenzie isn’t so much a breed as a type that described some sled dogs throughout the Arctic. Early on, the name was often used as a sales tool to sell unwanted mutts, crossbreeds that were a mix of native sled dogs, St. Bernards, Newfoundlands, other breeds, and maybe even wolf.

The research of Alaskan, Donna Dowling, lead her to a different conclusion. She noted that the mixed dog described in the previous paragraph was the Mackenzie Hound, a more urban dog far different from the classic Arctic sled dog archetype she knew as the Mackenzie River Husky. Sometimes called Porcupine River dogs, these long legged dogs likely got their name from outsiders who couldn’t tell apart freight huskies from different villages.

The decline of the Mackenzie River Husky began in the 60s with a perfect storm: Snowmobiles, the Canadian government’s mass killing of dog teams under the pretense of eradicating rabies, and higher profits from sled dog racing leading to different “trends” in sled dogs – all lead to near extinction for the Mackenzie. Dowling attempted to find any remaining dogs in an effort to resurrect the original MacKenzie and keep it from vanishing. She found a few living with serious mountain folk, and a few were scattered in remote areas of the Alaskan interior. We don’t know the current status of her efforts to save these freight dogs from disappearing altogether, but we’ve reached out and hope to hear from her.

You may be wondering why we post about a dog that some sources describe as a mixed breed.  Our reasons are two-fold. After reading about Donna Dowling’s research – the time she spent “dug in” at libraries, and her interviews with Canadian Mounties, “old timers” involved with Admiral Byrd’s Antarctic Expeditions, trappers, guides and mailmen, strongly suggest that at one time, anyway, the Mackenzie River Husky was likely a stand-alone breed.

Secondly, we’ve noted that the name, Mackenzie River Husky, is being used as a marketing ploy to sell oversized (or “giant”) Alaskan Malamutes, some of whom are touted as “AKC registered.”  A reminder that the AKC is a dog registry. It isn’t a guarantee that the breeder has adhered to a breed standard, let alone ethics, standards or guidelines established by the parent club of that breed. The AKC Malamute standard is clear about size:

The desirable freighting sizes are males, 25 inches at the shoulders, 85 pounds; females, 23 inches at the shoulders, 75 pounds. However, size consideration should not outweigh that of type, proportion, movement and other functional attributes. When dogs are judged equal in type, proportion, movement, the dog nearest the desirable freighting size is to be preferred. The depth of chest is approximately one half the height of the dog at the shoulders, the deepest point being just behind the forelegs. The length of the body from point of shoulder to the rear point of pelvis is longer than the height of the body from ground to top of the withers. The body carries no excess weight, and bone is in proportion to size.

Breeding solely for size to meet a taste for giant Malamutes is a disservice to the breed and the dog. A Malamute is not supposed to be enormous. Buyer beware.

Image: We don’t have consent to share images from Donna Dowling’s website, but you can see them here. We used a generic outline for our thumbnail image.

Under this simple marker lies the remains of a game little Fox Terrier, “Igloo,” the dog who accompanied polar explorer, Admiral Richard Byrd, on his first Antarctic expedition in 1928. It was there the terrier got his name, “Igloo,” and the nickname “Iggy.”Iggy had been a stray found by Byrd’s friend who beseeched the dog-loving Byrd to give the dog a home. Igloo became Byrd’s constant companion, particularly during times of solitude when the pair were holed up during grueling Antarctic winters.Following the successful adventure, the pair returned to New York City for a ticker tape parade. Later, Iggy met President Herbert Hoover at the White House.While Admiral Byrd was away on a lecturing trip, Igloo became sick and near death with food poisoning. Byrd canceled the engagement and chartered a plane home while a staff of Boston veterinarians struggled to save the small dog, but it was too late. Igloo was gone at age six. The death made national news, Time Magazine wrote an obituary, and thousands of letters of condolences were written by children from around the world and given to Admiral Byrd.Igloo was interred at the pet cemetery in Dedham, Massachusetts where a marker in the shape of an iceberg marks his spot. On the stone is a bronze plaque emblazoned with this epitaph: “Igloo-He Was More Than A Friend”Image of Admiral Byrd with Igloo found on Pinterest and happily credited upon receipt of information.
... See MoreSee Less