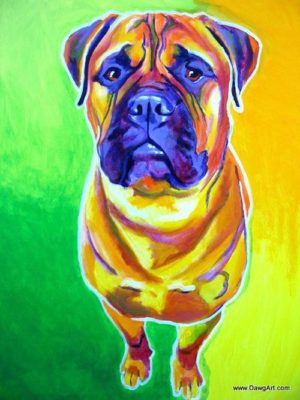 Most “dog nerds” know that the Bullmastiff introduced around 1860 was a fortuitous blend of 60% Mastiff with 40% Bulldog, or what some folks back then called the “Mastiff with a touch of bull.” It was just what gamekeepers needed at the time to help them guard their estate against poachers, in no small measure because rather than maul or kill the bad guy, the dog simply pinned the felon to the ground without biting them.

It may not be as well known that Bullmastiffs guarded John D. Rockefeller’s New York estate, or that Douglas Fairbanks Sr. and General Elliot Roosevelt also relied on the breed, or that they were used in the Mau-Mau Uprising, a revolt against colonial rule in Kenya that lasted from 1952 through 1960 and helped hasten Kenya’s independence.

Perhaps even less known is that in 1928 (some accounts say it was 1938), the diamond mining company, De Beers, imported several Bullmastiffs to protect their mining in South Africa. In her seminal piece, Rhodesian Ridgeback Pioneers, author Linda Costa shared correspondence from De Beers Ranch officials in Rhodesia in the early 1920s that outlined the diamond mine’s plans to breed “Lion Dogs” studs to Great Dane bitches, their offspring to be used to hunt vermin on the grounds of the diamond mines. Another source writes that the dogs were integrated into the Boerboel gene pool. We’ve been unable to find corroborating evidence of either, and we welcome insights from readers who may be able to provide more evidence.