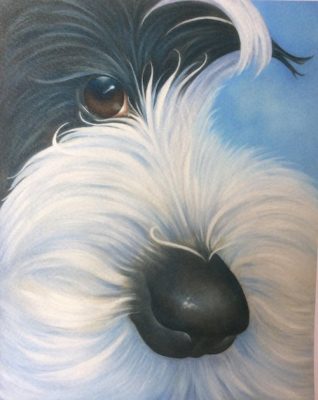 Knowing the meaning of words that appear as part of a breed’s name often offers insights into that breed.

“Griffon” refers to a wiry-coated dog; “Inu” means dog in Japanese, and “braque” is a French term meaning, “pointing dogs.” The word preceding any of the aforementioned terms usually refers to the breed’s origins, or in some cases, a description of the dog. The Braque du Bourbonnais, for example, evolved in the historic province of Bourbonnais, while most experts believe that the Shiba Inu was named for the terrain in which it hunted, or perhaps for the brushwood which is the same color as the Shiba’s coat.

“Apso” is another word that offers clues about a breed because in Tibetan, “apso” means “bearded,” or long-haired (though according to other sources, “apso” is a corruption of the Tibetan word for goat, “rapso,” suggesting a coat that is woolly and goat-like). Lhasa Apso, then, would literally mean a bearded or long-haired dog from Lhasa, the capital of Tibet.

In Tibetan, the Tibetan Terrier is known as the Dhoki Apso or Tsang Apso, the latter literally meaning a bearded dog from Tsang province. Here we digress to mention that the TT is not a terrier at all, but historically was an outdoor working dog (indicated as much by the word, “Dhoki”) used by nomadic tribes of Tibet’s lower valleys. Believed to be a forebear of the Puli, the TT helped shepherds move stock off the mountains by jumping onto the backs of sheep packed tight in narrow mountain passages to move them along, a behavior seen in Pulik, as well.

As an aside, an ancient Tibetan belief was that Tibetan Terriers brought fortune to its family. To not challenge this fortune, Tibetan Terriers were never sold nor crossed with other breeds, nor was it possible to buy a dog. The only way to obtain a Tibetan Terrier was to receive one as a gift, a matter of high appreciation.

2 thoughts on “The Meaning of “Apso””