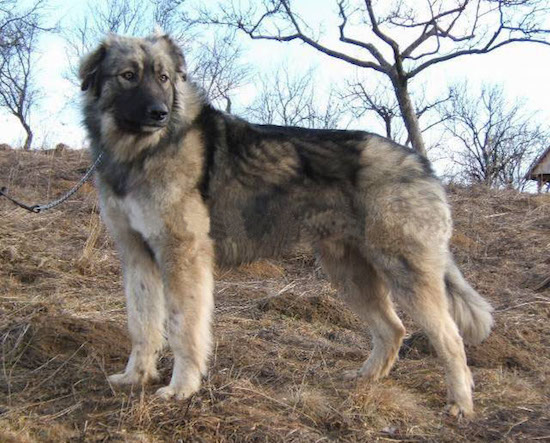 Thirty percent of bears in Europe live in Romania.

These are sobering statistics to anyone who breeds livestock in that country, which the majority of rural residents in Romania do. Conflict between wild life and ranchers is so inevitable that baseline surveys conducted in 2015 found that on average, farms experienced around 15 human-wildlife conflict events every year.

Needless to say, losing 15-20 sheep to bears and wolves every year not only impacts household income, but leaves farmers with strong negative feelings towards the wild animals that are just being, well, wild animals.  The passageway between Apuseni and the Carpathian Mountains is one large carnivores have been using for centuries, and this makes the Southern Carpathian corridor one of the most important ecological corridors in all of Europe. What’s to be done?

Since 2016, Fauna & Flora International in collaboration with Carpatin Club Romania (CCR) has been purchasing and donating Carpathian Shepherd puppies to shepherds, and providing food and veterinary treatments in the first year after donating the dogs. The partnership has also carried out several demonstrations to show that using LGSs (Livestock Guardian Dogs) reduces human/wildlife conflicts in a way beneficial to both.  CCR’s website also notes that it guides and helps shepherds participate in dog shows which serves to train these people on good practices in raising, selecting, and improving the breed.

Carpathian Shepherd Dogs, descendants of dogs developed some 9,000 years ago in the Carpathians, are symbolic of traditional Romania. Like all LGDs, they have an innate instinct to safeguard the livestock in their charge, and thick winter coats make them well suited for the harsh climate of the Romanian mountains. Unlike some other dogs, Carpathian Shepherds don’t bark unless they detect the presence of a wild animal that might pose a threat to the flock. Only then does the dog directly confront the bear or wolf.

Over generations, however, cross-breeding and a loss of knowledge and skills needed to correctly train an LGD resulted in dogs poorly adapted for the work. This put both dogs and livestock at risk.

To date, sixty-two Carpathian sheepdogs have been distributed across 249 farms. Coupled with the use of 238 electric fences, the pairing has been highly effective. Some farmers enjoy not only a reduction in livestock losses, but see a potential source of additional income if their dog is bred. To wit: As a result of the good care of that one family gave their dogs, the family received a certificate for opening an authorized kennel, and now they reduce their expenses by selling puppies to other shepherds.

Independent, highly energetic, and courageous to the point of the trait being legendary, Carpathians are becoming increasingly common as a family pet within Romania.