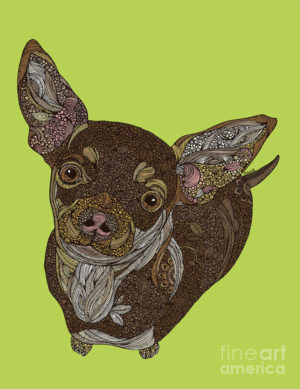 The Chihuahua’s AKC breed standard reads, “A well rounded “apple dome” skull, with or without molera.”

If you’re not a Chihuahua owner, and you’ve never had or dealt with a baby, you might ask: What’s a molera?

The molera (also called the fontanel), is a soft spot on the top of a Chihuahua’s head that’s not unlike a human infant’s “soft spot.” It is an opening in the top of a dog’s skull where the parietal and frontal bones have not fused together. Typically either round or diamond-shaped, a molera has the approximate diameter of a dime. Some moleras have smooth edges, while others have a rough edges, and as the puppy grows older, cartilage pulls the skeletal plates together which can close the molera and calcify the skull.

Back in the day, a molera was considered a mark of purity in the breed, but these days, many Chihuahua puppies are born without a molera, and the AKC breed standard accepts heads with or without a molera. That said, we’ve read that approximately 80% to 90% of all Chihuahuas are born with this anatomical feature.

Interestingly,  moleras were said to be more common in Chihuahuas during the early years of the breed’s history.  Before the mid 1970s, Chis were smaller, and smaller Chihuahuas resulted in a higher rate of moleras.

Referring back to the breed standard, it also mentions an “apple dome” skull, and this is simply a skull top that is rounded and more prominent than the rest of the dog’s skull. One source we came across indicated that because of their smaller, dome-shaped skull, apple-head Chihuahuas are more likely to develop and retain a molera than their deer-head counterpart.

At this point, we should write that there is no mention of a “deer head” in the AKC breed standard, nor in the breed standards of the Canadian Kennel Club and United Kennel Club. In the FIC standard, it’s a disqualifying fault. Chihuahuas with a deer head have, as the name implies, a longer deer-like head with a sloped junction of approximately 45 degrees where their muzzle joins their forehead.

We were told long ago that the term, “deer head” was coined as an excuse for dogs not being bred to the standard, and that many dogs with ‘deer heads’ aren’t really purebred Chihuahuas.  Some authorities on the breed speculate that the deer head variety is a cross between the the ancient dog called the “Techchi,” and the Chinese Crested. Others argue that the deer headed Chihuahua’s real ancestor is the Techichi.  We leave the debate to breed experts and can only say with certainty that both apple heads and deer heads exist in the breed, and that anything other than an “apple dome” head won’t fare well in a show ring.