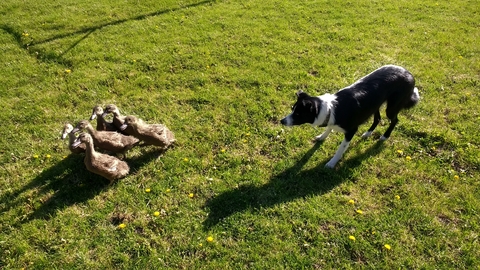 If we were to learn that the first dog to achieve a degree in Quantum Physics is a Border Collie, we doubt it would surprise anyone.  If any breed could pull it off, it would be this one.

And while our post isn’t as dramatic as announcing that a BC earned a college degree, it’s still impressive that the first dog of any breed in AKC history to earn the Master Herding title was a Border Collie named, “Rocky.”

Making it especially sweet is that his title was put on him by his breeder, owner and handler, Joyce Norris of Norwood Border Collies. Rocky finished his AKC Herding Championship back in June of 2010 in two weekends with five 3-point major wins on both sheep and ducks. In 2011, Rocky finished his HXAc. Perhaps thinking that he had done all he could, Joyce retired Rocky from competition, but he still kept in practice by working on stock sets and pen work at local trials.

In 2012, the new Master Herding title was announced, and as Rocky was only eight years old at the time, Joyce was excited to be able to compete with him again. He earned his Master Advanced B Course Duck title in eight straight trials and finishing the title on May 27, 2012 with another High in Trial.  When the dust settled, Rocky became a triple herding champion, and his full name became V-HC WTCH HTCH Norwood Winthrop Upon A Rock CD RN AX AXJ OF HXAsMdMcM HXBdM HIBs ATDsdc HRDIIIsm HTADIIIsdc HTDIIIds – ABCA and AKC Registered.

Tell this to anyone who thinks that today’s purebred dog can’t work. Pfffft.

Photo is not of Rocky, but is a generic photo from DreamstimePhoto