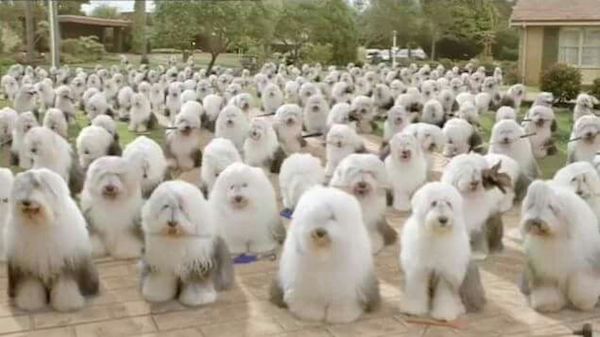 In 1953, Dulux paint became available on the retail market in the UK (the Dulux brand name was derived from the words “durable” and “luxury”). In 1961, the company included an Old English Sheepdog in its commercials, and it proved to be so popular that some people referred to the breed as the ‘Dulux dog’ instead of by its breed name.

Sadly, its fame hasn’t been enough to spare the breed a spot on the UK’s Kennel Club Vulnerable Breed list. Only 98 puppies were registered in the first three months of 2019, and last year in 2020, breed registrations fell to a five year low: Only 227 OES were registered.

It’d been a while since we’d seen a Dulux advert, so we were happy to see that a OES is still part of the branding. The ad below is its current offering:

The Dulux dog in the commercial is “Madison” owned by Ellen Wheeler of Lincolnshire. Wheeler was approached at a dog show by someone from the company, and the rest is commercial history as Madison has been the Dulux dog for the past few years. In 2020, Madison became a grandmother to eight puppies: Vienna, Olivia, Jasmine, Reggie, Cooper, Hengist, Arthur and Wellington. They were a much needed boost for a breed in which UK registrations were down by 25 per cent, the lowest recorded number for Old English Sheepdogs since 1961.

This past April, Madison and her owner were interviewed on the British daytime television program, This Morning. Ms. Wheeler tamped down the alarm over breed numbers and we certainly hope she’s right before the entire world population comes down to the just the dogs seen in our image at the top.

Apologies for an alarmist post title, but we hope to bring attention to this marvelous herding breed. Our image was found on Pinterest and has been “repinned” repeatedly, each time with no attribution. We’ll happy give/seek credit upon receipt of information.