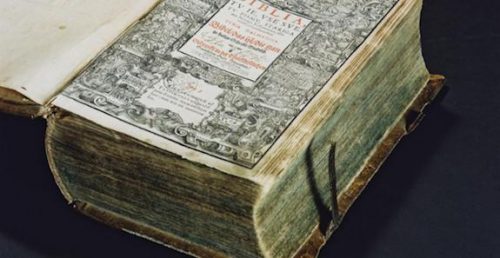 Jurij was born into a poor family in Krško, a village situated on the Sava River located in what is today southern Slovenia. As a child and teenager, he studied under a Protestant teacher and grammarian, and later went to a university in Germany where he perfected his Latin and German, learned Hebrew and Greek, and completed studies in philosophy and theology. It wasn’t all that surprising, then, when Jurik became a preacher in 1572 at the age of twenty-six.

Along the way, he married Barbara, and together they had four children: Janez, Katarina, Elizabeta, and Marko.  He wrote several religious books including Beautiful Christian Prayers and Agenda, but biographies remember Jurij for something else, and before we get to that, we have to “set the stage.”

In Jurij’s time, Latin was the language of the Catholic Church, but only a privileged few who’d been educated in Latin could understand church services, let alone the Bible.  Religious reformers were calling for church services to be held in a language everyone could understand, and that was a cause that Jurij took up when he set out – and completed – the task of translating the Bible into Slovene. This was no “walk in the park.” The Slovenian alphabet had been introduced only a few decades before. The Slovenian vocabulary was small, and Slovenian reference books were nonexistent. Turning text into understandable Slovenian was a herculean effort.

If that wasn’t hard enough, printers in Slovenia had been exiled. This necessitated having the bibles printed on foreign soil. When it came time to bring the leather-bound books home, they were hidden in barrels labeled “playing cards” or “store supplies,” but in the end, the first complete Bible in the Slovenian language now existed, and Jurij was responsible.

We are aware of Jurij for another reason. A year after he entered religious life, he received two Turkish dogs as a gift from a Bohemian duchess in 1573. Jurij bred the dogs – even mentioned them in letters to the duchess, and they became known by his name which we’ve not mentioned until now. Jurij’s surname was Dalmatin, and among the many theories about the origins of the Dalmatian is that the breed was named after Jurij. Whether this is the case is debated as some maintain that the origin of the Dalmatian is still obscure and rests solely on suppositions. We share Jurij Dalmatin’s story as one of those bits of conjecture.