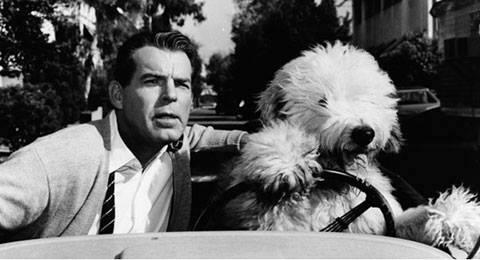 When a teenage boy named Wilby Daniels reads aloud the Latin inscription of an ancient ring he’s found, he turns into a shaggy dog.  Sound familiar?

“The Shaggy Dog” was an immensely popular Disney movie in 1959 (and the most profitable film produced by Walt Disney Productions at the time), but trouble came early in filming when the studio couldn’t find the right dog. Over twenty Old English Sheepdogs had been “interviewed” for the role, and none would do.

Meanwhile, at Bill Koehler’s obedience class in San Bernardino, “Lillybrad’s Sammy’s Shadow” strolled into the class, an Old English Sheepdog utterly convinced of his own greatness. “Sam’s parents,  Ch Norval Pride King and Ch Lillibrad Lindy Lou may have been show champions in the 1950s, but the behavior of their kid, Sam, in polite company was anything but champion caliber.  Nevertheless, Sam was a quick study, and he graduated from his novice obedience class with high marks.

Bill Koehler had been Disney’s chief animal trainer for over 20 years, and when his partner, Hal Driscoll, heard of the problem the studio was having in finding the right Old English Sheepdog, he contacted the studio about Sam. They took a look at the dog, and the rest is movie history. When it came to learning new behaviors, Sam was a sponge. He gamely learned to pretend to drive a car, and convincingly performed a life-saving rescue scene by diving and swimming in deep water. Originally, three dogs were intended to be used for filming the movie: Sam would perform the principal work, and two other dogs would serve as  “doubles” in special action scenes. Sam, however, ended up doing just about everything. “The dog, seriously, was almost human,” stated Roberta Shore for the commentary track of “The Shaggy Dog” when it was released on a DVD. Shore also sang the following movie track:

Sam would go on to be voted the top movie animal star of 1959. We’ve read that several pictures of Sam appearing with his parents, along with photos of him with Roy Disney and Bill Koehler following his award appear in the book, The Complete Old English Sheepdog by John Mandeville.

We stumbled upon an OES forum in which the following comment appeared: “I was reminiscing about my step grandmother, Lillian Lovejoy [Ch Lillibrad Lindy Lou’s breeder]. I loved visiting her house in Denver as a little girl. She was an interesting woman, and one of the many things she put her energy into was raising Old English sheepdogs. She had a portrait of one of her dogs over the mantle of her fireplace. His name was King, and she talked about meeting Fred MacMurray during the filming of the original Shaggy Dog movie. She had pictures of Fred, King, and her. Her dogs had the Lillibrad name because it was a combination of her first name with my sweet grandfather’s name-Bradbury.”

To read more about Sam and see him in action, read here.

Image from Pinterest and happily credited upon receipt of information