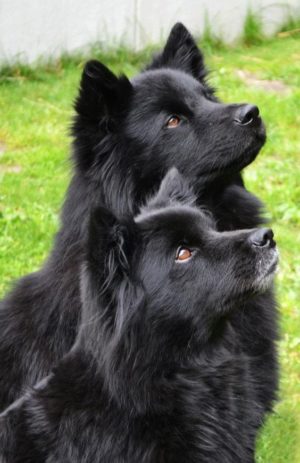 The Sami people of Lappland, indigenous to northern Scandinavia, were the first to breed Swedish Lapphunds. For the Sami, these dogs served as hunting dogs, guard dogs, and most importantly, herding dogs. The Sami were semi-nomadic people who followed herds of reindeer  – their primary food source – on foot or wooden skis as the animals searched for grazing grass. The Lappies were used to gather the reindeer and corral them, and his “loquaciousness” was a large part of his method.

We’re told that the breed has an unusually high-pitched bark that is achieved by rapidly pushing air through their diaphragms while restricting their vocal cords. What emerges is a loud, squeakier bark that lets reindeer know it’s time to move. Reindeer became accustomed to this high pitched barking coming out of the four-legged creature among them, and knew the dogs to be non-threatening friends. The same could not be said of predators who were also warned off from coming too close by the barking dogs.

The breed’s importance in the fabric of Swedish history has earned the Swedish Lapphund, the oldest of Sweden’s nine native breeds, the title of Sweden’s National Dog. It was the first dog registered by the Swedish Kennel Club. It’s also thought to be one of the most ancient breeds in existence today. In fact, the dog skeleton uncovered by scientists resembled the Lappie, and the bones were estimated to go back more than 7000 years.

Sadly, the advent of snow mobiles and ATVs put the Lapphund in a position of finding itself out of a job, though some Sami still herd reindeer today, and the dogs occasionally help with herding. Nevertheless, the breed was close to extinction in the mid-20th century.

Through the work of dedicated breeders, the Swedish Lapphund was pulled back from the brink.  It remains a very rare breed with an estimate of approximately 1000-1200 worldwide, the majority of which are in Sweden. That said, we came across the extraordinary story of a woman who, in 1999, found a Lappund sitting on the side of the road in Connecticut. You can read that story here.

The Swedish Lapphund was recognized by the United Kennel Club in 2006, and was added to the AKC’s Foundation Stock Service in 2007.