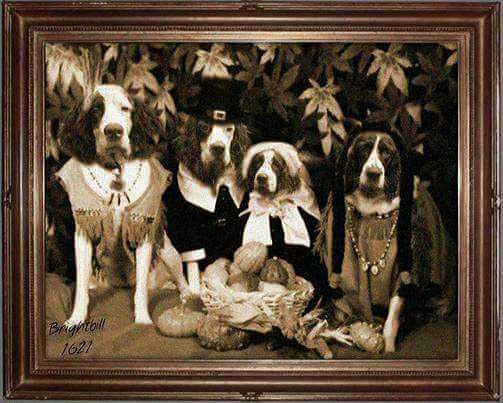 Thanksgiving 2019 is still 154 days away, but we thank providence every day that John Goodman, a 25-year-old passenger on the Mayflower, brought his Mastiff bitch and English Springer Spaniel for the voyage. When the Mayflower finally landed in Cape Cod after the sixty-six day journey from England, it could be accurate to say that the first two purebred dogs to land in the New World were Goodman’s dogs. Native Americans, however, were known to have their own dogs, and they would have to be credited for the first native canines, unless, of course, Rudyard Kipling had it right:

Then the Woman picked up a roasted mutton-bone and threw it to Wild Dog, and said, “Wild Thing out of Wild Woods, taste and try.” Wild Dog gnawed the bone, and it was more delicious than anything he had ever tasted, and he said, “O my Enemy and Wife of my Enemy, give me another.”

The Woman said, “Wild Thing out of the Wild Woods, help my Man to hunt through the day and guard this Cave at night, and I will give you as many roast bones as you need….”

Wild Dog crawled into the Cave and laid his head on the Woman’s lap, and said, “O my Friend and Wife of my Friend, I will help your Man to hunt through the day, and at night I will guard your Cave.”

Getting back to the Mayflower, the publication, “Mourt’s Relation,”  written primarily by Edward Winslow and William Bradford between November 1620 and November 1621, described in detail the landing of the Pilgrims at Cape Cod, including the death of John Goodman who passed away in his first winter in America in 1620. Other colonists continued caring for his dogs.

Some sources state that there were Spaniels in the United States since around 1700, and while they may not have been purebreds as we understand the word today, we know that the first pedigreed English Springer Spaniels to arrive in America came in 1907, dogs who’d been imported for Robert Dumont Foote of Morristown, New Jersey.