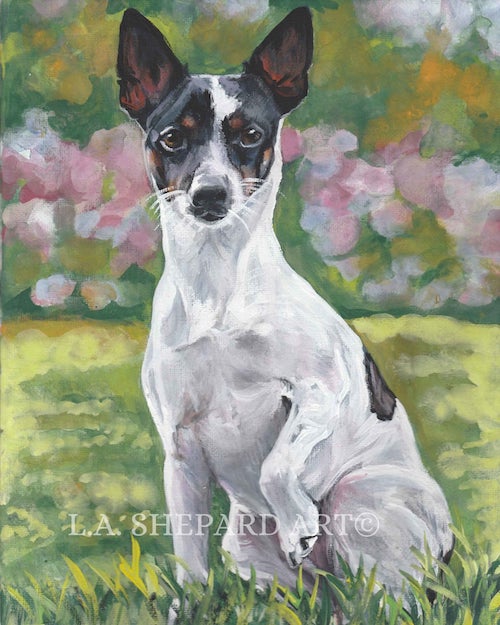 Though the Tenterfield Terrier’s tail is traditionally docked (a common practice performed on a working terrier to prevent injury), the breed standard indicates that the tail may also be “undocked” and “of varying lengths.”

To our knowledge, the Tenterfield Terrier is the only terrier breed with tails that come in natural bob tails (known as NBT) of various lengths, ranging from full tails through to no tail at all (referred to as a “rumpy”). The gene responsible for it has never been known to cause any health issues in the breed (i.e., no form of Spina Bifida) making the length of tail possibly the breed’s most unique physical feature. It’s thought that certain bloodlines carrying the bob tail gene, but genetically, one parent must be a bobtail to produce it because a breeding between two non bob tails cannot produce a bob tail puppy.

Because NBT is a dominant trait, and when a pup has two copies of the defective gene, it is lethal to the development of the fetus and the pup will die before it can be born. One copy of the gene, however, can result in no tail, a normal length tail, or any length of tail in between. It is for this reason, one imagines, that breeders are required to identify pups with natural bob tails on the pedigree paperwork.

In a conformation ring, the dog’s tail length isn’t supposed to be important, and while any tail length is technically correct, there are those who feel that a well set half tail balances the dog, but that a full tail spoils the overall outline of the dog, particularly especially if it curls over the back and the end of the tail breaks the top line of the dog.  What is more important is that the tail be carried “high set and erect when alert. Carried gaily, showing bold temperament.” In short, it’s an indicator of the dog’s temperament.

4 thoughts on “The Only Terrier With This Tail”