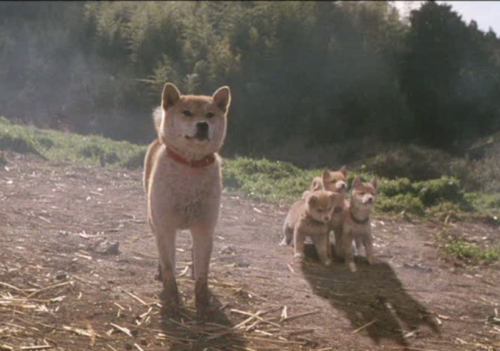 The deadliest earthquake to strike Japan since 1995 came in 2004, a seismic event the Japan Meteorological Agency named the “Heisei 16 Niigata Prefecture Chuetsu Earthquake.” The initial earthquake had a magnitude of 6.6 killing about 40 people and injuring about 3,000 who’d been trapped under collapsed buildings.

The three strongest earthquakes occurred within less than 40 minutes with epicenters spread across Ojiya city,  Hirokami, and one more village, Yamakoshi in Niigata Prefecture.  In that village lived an elderly person who was saved by his Shiba Inu, “Mari,” who found her owner trapped under a cabinet. He was able to extricate himself from the rubble and eventually, was evacuated to safety by a helicopter. 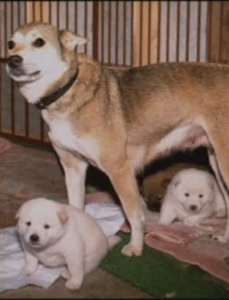 A photo of the real Mari and her puppies

The owner, however, was not Mari’s first concern. She had puppies, and her first act was to move them to a save place before finding her owner. The little family wasn’t able to accompany their owner onto the helicopter, however, because animals were not allowed on it. It was two weeks (!) before the owner was able to return to what was once his home, and he found a gaunt Mari and her plump, well fed babies – all alive.

Mari’s story hit the news, and was made into a Japanese movie called “A Tale of Mari and Her Three Puppies,” a far more detailed account than the synopsis we gave you above. In actuality, the real family was made up of a grandfather, a father, his son and his daughter. Mari had been abandoned or lost when the siblings found her. At first, the kids avoid taking care of the her because their father was afraid of dogs, but eventually,things worked out and the dog was accepted into the home. Mari grew up,  had puppies of her own, and then the quake hit. The daughter and grandfather were trapped under rubble until Mari ran off and found Jietai (Self-Defense Force, or Japanese military) rescue workers, who rescued the pair.

We found a bit of of the movie on You Tube:

The movie got a scathing review from one writer who took issue with how Mari was portrayed as being treated in the movie,  and we continue to search for information on what became of the Maro and her puppies in subsequent years. We do know that a year after the earthquake, villagers held their annual fireworks celebration and called it “Fireworks for Mari” in honor of the Shiba’s devotion and bravery.