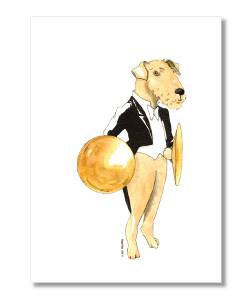 We honestly don’t know if the Keighley and District Orchestral Society’s name change to the Airedale Symphony Orchestra in 1982 had anything to do with the Airedale Terrier, and as much as we’d like to think so, it’s more likely that the name reflects a geographic area in England.

Still, orchestras are part of breed history, at least in Australia. When the Airedale Terrier Club of Victoria was first formed, it was described as being quite large, and one report indicates that at least 100 people came to the Annual Dinner Dance at the Victoria Coffee Palace in 1934, complete with a live orchestra playing.

Admittedly, connecting an orchestra with breed history is a stretch, but imagine a time when a dog breed club was vibrant enough to throw a dinner dance complete with a live orchestra!

Our image is from a delightful series of greeting cards that featured charming illustrations of different dog breeds playing a wide variety of instruments, in this case, the Airedale playing cymbals. Sadly, we’ve not been able to locate where these cards can be purchase.