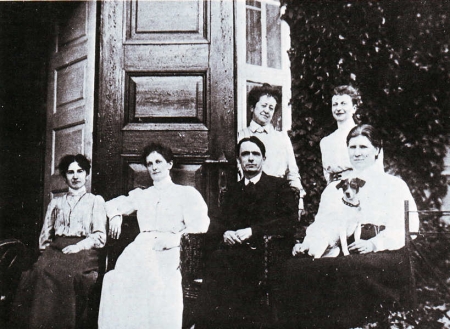 Do you believe that there is an objective, intellectually understandable spiritual world accessible to human experience, and that we can experience spiritual discovery through a way of thinking that’s independent of sensory experience?  Albert Schweitzer did. So did author, Saul Bellow; artist, Wassily Kandinsky, and other prominent individuals. This philosophy of thought was called Anthroposophy, and it was founded in the early 20th century by the Austrian esotericist, Rudolf Steiner.

The self described “spiritual scientist” believed in teaching the whole student — mind, body and soul. It was his thoughts on education upon which Waldorf schools were based. He was also interested in the soul of dogs and gave lectures on the topic. In 1907, he wrote, “… many animals in our environment perform actions, and enter into relationships even among themselves, which are difficult to imagine without a soul. One example is the faithfulness of the dog. We can only with difficulty give ourselves to the thought that nothing lives in its inner being analogous to what lives in man. If we consider certain performances, can we disregard a higher, spiritual activity?”

One wonders how much his frame of thought was influenced by his own relationship with dogs, and in particular, “Pschulek.” It’s said that he was photographed with a dog only twice, and one photo we found is the one you see above (the other is here). Pschulek was said to be an Old Chicken Dog, another name for the Danish-Swedish Farm Dog, and it’s reasonable to believe it to be so since Steiner’s doctorate in philosophy was earned at the University of Rostock located exactly where the breed was developed.

Today, there are an estimated 2,000 Danish Swedish Farm Dogs in Sweden alone, but good things are hard to keep secreted. The first Farm Dogs in America were imported from Denmark in the late 1990s, and in 2006, the first Danish-Swedish Farm Dog Specialty was held in Colorado.