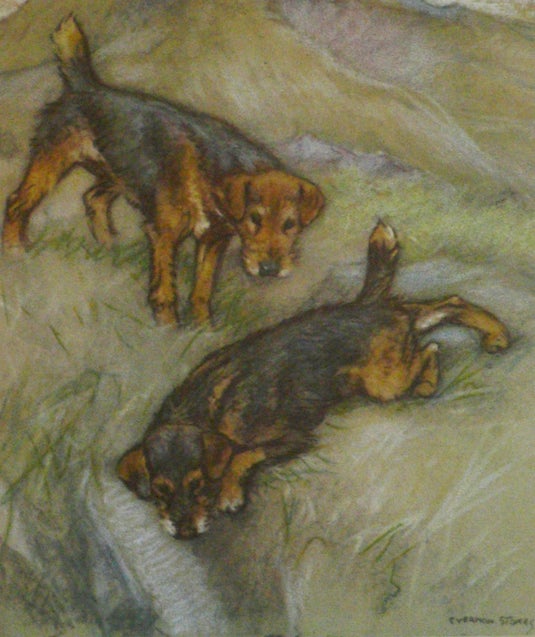 Millions of years ago after nature battered parts of England with lava-spewing volcanic activity, an ice age followed, and after that came a massive melt and shape shifting erosion. What remained was a rugged landscape known today as the fells.

Barren stretches dotted with high ridges of hardened volcanic rock between valleys make up the fells in England’s Lake District. Frigid water, crevices and cairns, mazes of underground tunnels, all manner of nooks and crannies, and seemingly bottomless pits known as swallow holes provide breeding ground, as well as escape routes and hiding places for badgers and otters. Back in the day, it was the mountain fox, however, that most plagued poor farmers by their killing sheep and chickens.

The geography itself shaped the dogs that could dispatch these small animals where they lived – hidey holes mostly unreachable by anything much larger than the prey. Those dog were the forebears of the Lakeland Terrier.

This was tough land, and early Lakies didn’t get to hitch a ride in a saddlebag like shorter legged terriers, they ran it, sometimes as much as 20 miles a day. They scaled jagged rock faces that could mean certain death to their lowland cousins. They skidded across scree, leapt from one high ledge to another hair raising ledge, then undulated with the twists and turns of a tunnel to get to their prey, and the prey didn’t go willingly if it was an ill tempered badger nothing short of vicious. Perhaps it was best put by the author of The Fell Fox, Brian Plummer, when he wrote, “When a terrier goes to ground in such places, it is a duel ‘twixt dog and fox with only God as umpire, for the terrier man can do little to aid the dog once it has vanished after a fox into a crevice.”

Agility and dexterity needed to negotiate through rocks;

A head often described as a brick, but a narrow physique allowing the dog to fit through tunnels and crevices because where the head fit, the body had to follow;

That body had to be a bit longer in loin than the other long legged terriers to enable the dog to practically undulate through tunnels of with curves, twists and turns;

A deep chest to house heart and lungs providing the dog with stamina;

A somewhat shortened humerus because the Lakie got into holes by squeezing through them, first one shoulder, and then the other; a shortened upper arm also allowed the dog to work clear of the deepest part of his chest when digging in a tunnel;

Strong, short, and nearly vertical pasterns allowed the dog to dig and maintain balance when running above ground.

Above all, the dog needed gameness and tenacity to match the opponent, but the sense to know when to back off.

By the 1880’s, farmers and hunters gathered at “meets” to compare their dogs with everyone else’s. They discussed which dogs were “the likeliest-looking terriers” suitable to go after a fox or otter, and observations were inevitably made about the attributes that made one dog a more successful worker than another dog. In the Lake District, dog shows were also being held regularly. It was then that Wire Fox Terrier may have been added to fell terrier bloodlines resulting in a compact look.  At the Kersurch Dog Show held in 1912, a breed club was formed to recognize what was then called the Cumberland County Terrier. Once a club was formed expressly for this “new” breed, the use of other breeds in breeding programs stopped, and the dogs were bred only to other dogs of their kind.  World War I saw the breed club was disbanded, but after the war in 1921, nine Lakeland Terrier fanciers rebooted the ideals set forth by the first Terrier breed club. It was in Whitehaven, Cumberland County that they decided to rename their breed the “Lakeland Terrier” after its homeland, and the celebrated “Yellow Earl” (Hugh Lowther, 5th Earl of Lonsdale) became the first president of the Lakeland Terrier Association (now defunct).

Image: From 1947, an original Vernon Stokes mounted dog bookplate is offered by Hollysprints and is available for purchase here

2 thoughts on “The Breed Shaped by the Fells”