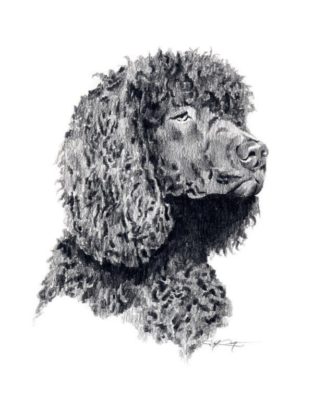 She’s got large hairy feet, wide hips, and well developed thighs. Though her coat is oily, it is a riot of curls. She’s strongly built for an old gal – indeed, she’s got the sturdy, broad back anyone would want in a working girl.

No, she’s not the blind date your in-law set up for you, she’s the Irish Water Spaniel, and she’s not like any other dog.

Her conformation aside, she is one of only two types of dogs described in the first classifications of Spaniels: Land (or Sporting) Spaniels and Water Spaniels. Dr. Johannes Caius, physician to Edward VI, Queen Mary, and Queen Elizabeth I, described her in 1570 when he wrote, “[Water Spaniels] have ‘long, rough, and curled hair’ with the end of his tail is somewhat bare and naked, as if by shearing off such troublesome and needless hair.” There is also reference to the “Water Spagnell” in Edward Topsell’s zoological encyclopedia of 1607, The History of the Foure-Footed Beastes. 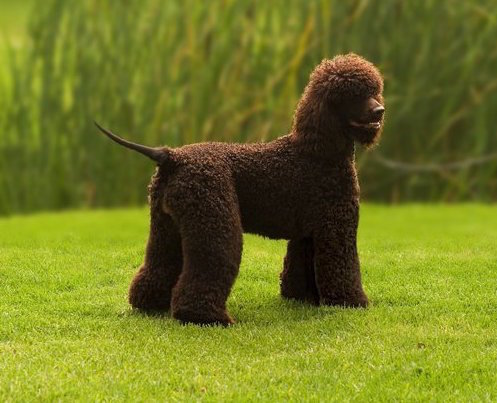 The exquisite IWS you see above is “Bella,” aka BIS/BISS GCH Whistle Stop’s Wind on the Water loved by Michelle Cummings, a dog who graced NPDD’s 2019 calendar, “Dogs of National Purebred Dog Day.” While the string of letters that appears before Bella’s name indicates a successful, well recognized dog in the show ring, the titles belie the breed’s humble heritage. Historically, ownership of this breed was not restricted to the gentry or even landowners when in many other countries, such was not the case for native breeds.

Ireland was a country that seemed to suffer from famine on a routine basis. Shallow water birds and ducks were a source of food for impoverished peasants, and the Irish Water Spaniel – which peasants could legally own – found, caught, killed and/or retrieved dinner for people who couldn’t afford to own a gun. In fact, J.S. Skidmore applauded the breed in the late 19th century when he wrote that he recommend the breed to “gentlemen of limited means,”  or for those who did not “have the accommodation to keep a team of dogs” that could do what one Irish Water Spaniel could do: Point, set, retrieve, flush  – and more. What’s more, with his waterproof oily, curly coat, he could endure the miserable wet, cold conditions of working in bogs and marshes without much attention from his destitute owners. All these traits helped more than one Irish family survive when their potato crops failed.

Ownership of the breed spanned across various social, economic, ethnic and political circumstances, and for good reason, the IWS was the third most popular sporting dog in the United States in 1875. That said, take another look at Bella’s picture, and be baffled that her breed appears on the Kennel Club’s list of Vulnerable Breeds in their country of origin. In 2018, only 111 IWSs were registered with England’s Kennel Club, though this is an improvement over the 69 dogs registered the year before. #SaveOurBreeds