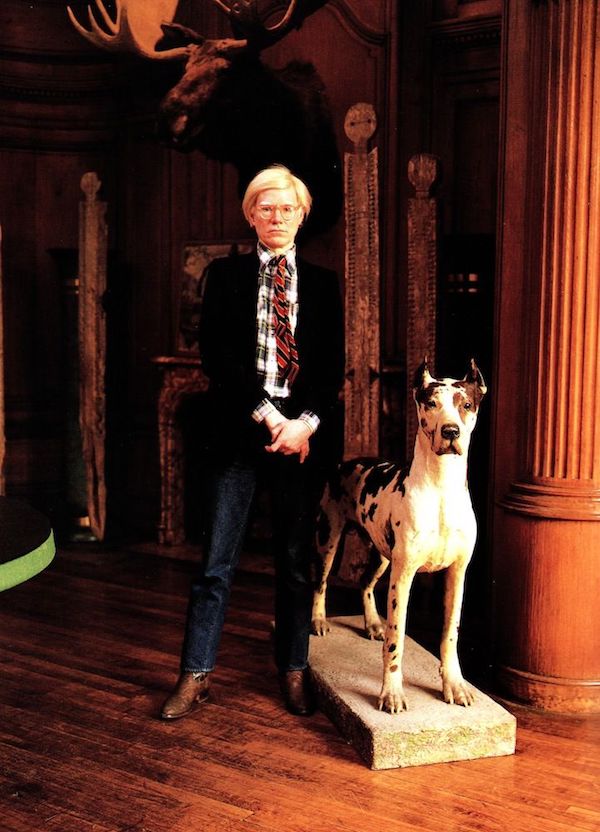 A stuffed Great Dane is probably not what one expects to encounter at a museum honoring a famous artist, but that is exactly what visitors may encounter at the Andy Warhol Museum in Pittsburgh, Pennsylvania.  More on the Great Dane in a minute.

Andy Warhol, celebrity pop artist, director and producer, passed away in 1987. He was a “prodigious collector,” which is to say that he was a hoarder, and the museum contains 608 “time capsules” to prove it.  Starting in 1972, Warhol filled up boxes of all the material he had encountered throughout his life: Fan mail, photographs, newspaper articles, magazines, etc. One can almost picture him using his arm to shove everything on his desktop into a cardboard box set next to his desk. Little wonder that the Warhol Museum is the largest museum in North America dedicated to a single artist. It holds the film and video collection of 200 of Warhol’s famous “Screen Tests, 900 paintings, nearly 2,000 works on paper, over 1,000 published unique prints, 77 sculptures, 4,000 photographs, and over 4,350 Warhol films and videotaped works. 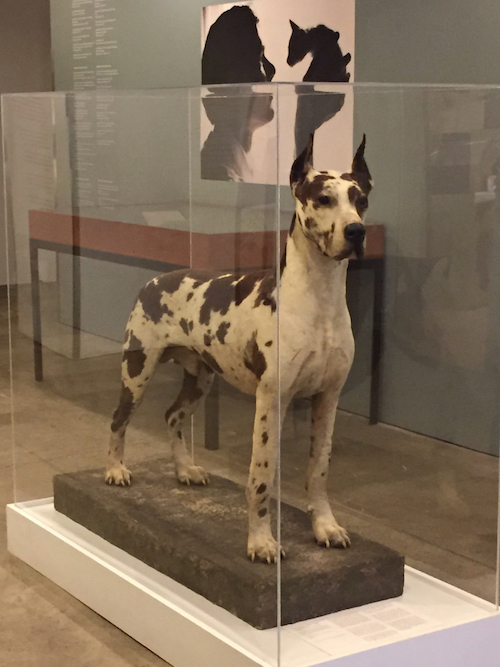 Back in 2008, the Museum held a special exhibition entitled “Canis Major: Warhol’s Dogs and Cats (and other party animals),” to pay homage to Warhol’s favorite animals that had been documented and captured in photographs and prints by the artist. The exhibition displayed Warhol’s collection of taxidermied creatures, including Cecil the Great Dane, who is said to have “guarded” Warhol’s studio from 1969 to 1987.

Warhol had purchased Cecil for $300 in the late 1960s from an antiques dealer who claimed (winkie winkie) that the dog had once been owned by Hollywood movie mogul, Cecil B. DeMille. Cecil’s real name was “Ador Tipp Topp,” a dog born in Germany in 1921 and purchased as a puppy by an American who entered him in many competitions, including Westminster where he won a blue ribbon. Cecil had been a multi-ribbon show champion, and upon his death in 1929, he was stuffed as part of a Dog Hall of Fame at Yale University’s Peabody Museum which closed in 1964.

By the 1960s, the collection had been relocated to storage, and Ador’s remains were sold to a Yale drama student for ten dollars. The dog was eventually passed on to an antiques dealer, who made the claim about filmmaker Cecil B. DeMille – Warhol believed the story. He bought the dog in the late 1960s for 300 dollars, and it’s believed that the antiques dealer made 290 dollars on the deal.

Hovi owners, is the Hovawart a versatile breed? Can you share with us pictures and experiences of the things your dogs can do, from agility and obedience, to rally, therapy dog work and anything else? What training tips can you offer when working with this breed?